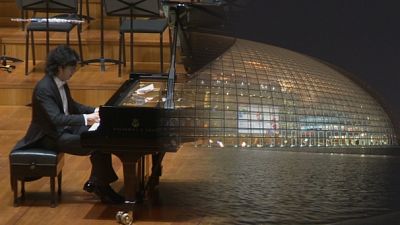 The stage is set for a major event in the Chinese capital of Beijing as Chinese pianist Yundi Li, a mega star at home and abroad, gets ready to perform at the National Centre for the Performing Arts.

The distinctive building, designed by French architect Paul Andreu and known as The Egg, demonstrates an ambition to become the epicentre of Chinese culture.

Preparing for the concert, Yundi Li told us: “Beijing’s public is really enthusiastic and many attend my concerts. The audience is made up of professional elites. They know the music very well.

“I’m 100 percent focused tonight, I intend to invest not only my technical skills but also all my emotions in the music.”

It was the music of Chopin that made Yundi an overnight sensation 10 years ago. He is known as the youngest pianist to win the International Frederic Chopin Piano Competition.

Tonight at the age of 28 he is performing the music of Hungarian composer Franz Liszt with the same star quality that earned him respect around the globe.

China is not only exploding economically. The country has also made a giant cultural leap, especially in music and the arts.

After spending years studying in Europe Yundi has now made Beijing his home.

He said: “For a virtuoso pianist and as an artist myself, perfection is what one aims for, all the time. And looking for that perfection gives me excitement and happiness.”

“I’m looking forward to the concert, I’m stressed and excited at the same time, and my head is bursting with notes. I’m getting ready now to control my emotions and give my best at the concert later.”

His talents are a shining example of what China has to offer the world.

Li added: “I think Chopin and Liszt are going to be happy with my playing tonight because I’m 200 percent focused and I intend to give all my passion in playing their music.”