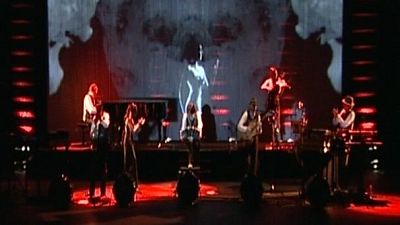 The Gotan Project were among the prestigious guests of the fifth Monte Carlo Jazz Festival. The trio comprises an Argentinian, a Swiss German, and a Frenchman, accompanied by a variety of talented musicians and a fabulous singer. They became world famous in 2001 with an album mixing tango and underground music.

Argentina’s national myths like the tango often recur in their music, but that’s not all.

Christoph H. Müller explained: “We decided to use the football theme, which – and to put it simply – together with tango, is the thing in Argentina. We were able to contact the best Argentinian football commentator ever – Victor Hugo Morales – and in this song he commentates on an imaginary football match where each musician passes the ball to the other, and then to us; and our Argentinian ‘friend’ has the honour to make a dream come true: scoring a goal with Hugo Morales’ commentary!”

The Gotan Project’s work also evokes some of the difficulties Argentina has faced, and reflects the atmosphere of the country’s recent history.

“The country where I was born and grew up went through a very bad crisis, especially in the Nineties; it was a sort of social atomic bomb which completely disrupted society in Argentina,” said Eduardo Makaroff.

“The ‘Europe of Latin America’ became the country where kids wander in the streets and half the population lives below poverty line – it’s a catastrophe!

“Argentina used to be famous in Latin America for its established middle-class, prestigious universities and great writers. And despite its financial crisis, it has never stopped producing culture.”

“I think that perhaps it’s easier to destroy the economy than the power of culture,” added Makaroff.

Go-tan is a play on the word ‘tan-go’, reversing its two syllables. They play the same type of game with the music too.

“We sometimes try to do things the other way round: we do electronic music but it’s organic music,” said Müller. “We exploit types of music which don’t necessarily go with the tango, such as bluegrass, and we bring it to our music. We look for unusual links.”

Philippe Cohen Solal went on: “Our recipe is to follow our flair and not bother whether or not we’ll be played on radio or TV. What matters is what we like, and we have produced the music we love; which is why for the past 10 years, in all our albums, there’s not a single piece, or a single note, we regret.”

In this item you can hear parts of the following pieces: