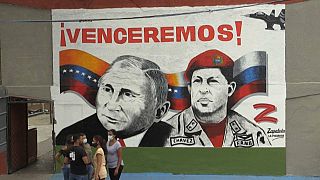 A smiling Vladimir Putin next to the late Hugo Chávez and, in the corner, the "Z" for "victory": left-wing collectives have painted a mural in a Caracas neighbourhood, a stronghold of Chavism, in support of Russia, which has been strongly criticised for its incursion into Ukraine.

"We want to thank Russia and its president Vladimir Putin for all the support he has given us," Francisco Moreno, a member of the leftist group "Zapatista," who along with his comrades from "La Piedrita," painted the graffiti at the entrance of an indoor football pitch in Catia, told AFP.

"It's a message of solidarity with the Russian government that has always supported us: the first vaccine we had was the Russian one, in fact, my mother was vaccinated with Sputnik".

Moscow has been a key ally of Venezuela since the time of Chávez and continued with the current president, Nicolás Maduro, who, shielded by this relationship, has been able to circumvent international sanctions against him.

And Maduro has expressed his support for Russia during a conflict that has earned Putin widespread international rejection.

The painting, along with the sentence "We shall overcome," also depicts a Sukhoi fighter jet, representing one of the military equipment agreements signed between the two countries, which included Russian-made air systems and weaponry.

And the "Z", which has become a symbol of support for the invasion of Ukraine, stands for "Russian victory", Moreno notes. "They want to sell Russia as a monster, just as they want to sell Venezuela as a dictatorship.