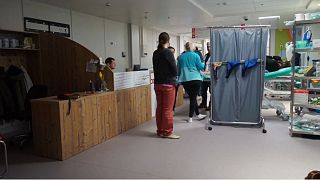 US journalist injured in attack near Kyiv

A U.S. journalist being treated at a hospital in the Ukrainian capital of Kyiv said that he and a U.S. colleague were shot after they were stopped at a checkpoint just after a bridge in Irpin, a town near Kyiv.

Juan Arredondo told Italian journalist Annalisa Camilli in an interview from the hospital before being taken for surgery that the colleague who was with him was hit in the neck and remained on the ground earlier on Sunday.

Camilli told The Associated Press that she was at the hospital when Arredondo arrived and that he had himself had been wounded, hit in the lower back when stopped at a Russian checkpoint.

Arredondo told Camilli he didn’t have further information on the fellow U.S. journalist, whom he identified as Brent Renaud, a friend.

Later, Kyiv police confirmed Renaud was fatally wounded. Local reports described Renaud as a New York Times journalist. However, the newspaper said Renaud was not working for the Times, though he had “contributed to the Times over the years”.