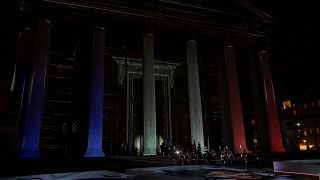 The voice of Josephine Baker resonated on Tuesday through streets of Paris' famed Left Bank as recordings from her extraordinary career kicked off an elaborate ceremony at the domed Pantheon monument, where she was symbolically inducted - becoming the first Black woman to receive France’s highest honor.

French President Emmanuel Macron made the decision in August to honor the “exceptional figure” who “embodies the French spirit,” making Baker also the first American-born citizen and the first performer to be immortalized into the Pantheon.