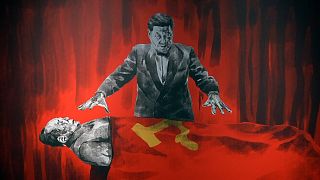 Chinese dissident artist Badiucao opens his first exhibition in the West, despite the Chinese Embassy's attempt to cancel it, in Brescia. The exhibiton includes pieces which are criticial of the Chinese authorities. Badiucao who has been living in Australia for 10 years says he wants 'to use (his) art to expose the lies and problems with the Chinese goverment' . He applauds the Municipality of Brescia and the Foundation that manages the city's museums fore refusing to give in to pressure from the Chinese government 'bullies'.