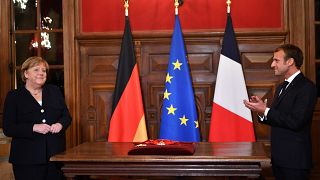 French President Emmanuel Macron hosts outgoing Chancellor Angela Merkel for a valedictory visit as she bows out after 16 years in power. During their visit to the town of Beaune in the wine-growing Bourgogne region, Merkel receives from Macron the Grand Cross, the highest distinction of the Legion d'Honneur, France's chief honour.

"I wanted to thank you for teaching me so much and for accepting this impetuous young president who wanted to shake things up," Macron tells Merkel.

Macron and his wife Brigitte joined Merkel and her husband Joachim Sauer for a visit to the Hospices de Beaune, a medieval hospital that is now a major monument renowned for surrounding vineyards, and for a piano recital at the Vougeot Chateau.

The event is also seen as a gesture of friendship between France and Germany, whose partnership is at the heart of the European Union.