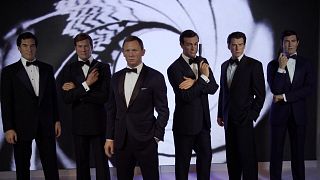 To mark the return of James Bond in the film "No Time to Die" starring Daniel Craig, Madame Tussauds has gathered waxes of the six stars who portrayed the iconic spy on the big screen for a permanent exhibition in London.

George Lazenby is the only Bond in the series to have made only one 007 film, "Her Majesty's Secret Service" in 1969.

Back in London, the group of six will be on display to the public from September 30.