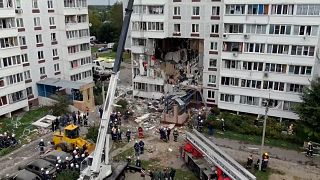 A gas blast occured in a residential building in Noginsk, Russia

The search and rescue works and the removal of rubble are underway at the scene of the gas explosion in a nine-story residential building in the city of Noginsk, 50km east of Moscow.

The explosion occurred on Wednesday morning, causing a partial collapse of the building. Preliminarily, 30 apartments were damaged, with eight of them being completely destroyed. According to media reports, the blast might have been caused by a leak of gas left burning to keep one of the apartments warm at night.

At the moment, 170 people and eight service dog units are involved in the search and rescue operation.

Following the incident, the Russian Investigative Committee opened a case on providing services not complying with safety requirements.