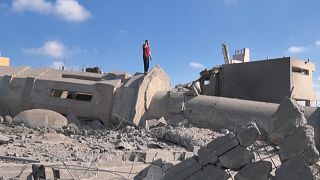 People inspect the rubble of the Qlebo mosque at the Jabalia refugee camp in the northern Gaza Strip, destroyed by an Israeli airstrike.

Israeli fighter jets struck several sites in the densely-populated Gaza Strip, which it has blockaded for more than a decade.

Palestinian militants responded with volleys of rockets into Israel, killing a man near Tel Aviv.

Tor Wennesland, the UN Middle East envoy, said he was "appalled" and that 40 Gazan and two Israeli children had been killed in recent days.

Israeli air and artillery strikes on Gaza since Monday have killed 139 people including 39 children, and wounded another 1,000, health officials say.

Palestinian armed groups have fired at least 2,300 rockets at Israel, killing 10 people, including a child and a soldier, and wounding over 560 Israelis. Israeli air defences have intercepted many rockets.