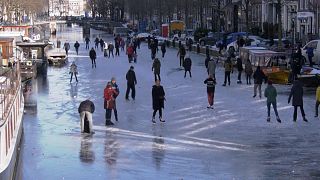 Many in the Netherlands want to make the most of the frozen canals, ponds and lakes following an Arctic blast hitting northern Europe this week.

Dutch authorities, however, have decided to limit access, keeping roads free for essential and emergency traffic only.

This means parking near hotspots is no longer possible; those who want to skate will have to walk or cycle. But today, skaters can't seem to be stopped.

In The Hague, firefighters had to help skaters out of the Hofvijver, a pond in the centre of the city, after melting ice caused several people to fall through.

Others were forced to wait on an island in the middle of the amateur rink before being rescued with a ladder.

Meanwhile, dozens of people in Amsterdam took to a small frozen section of the historic Prinsengracht canal, which has not been used for skating since 2018.

The area, between two bridges close to the landmark Westerkerk, saw people skating and walking along the surface.