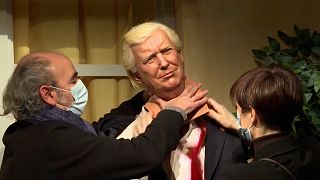 The Musée Grévin in Paris is scrapping its statue of the outgoing American president without waiting for the official end of his term of office and the inauguration of his successor Joe Biden, whose statue is in the process of being made.

Visitors had a particular penchant for taking photos with their fingers up Trump's nose, resulting in the need for repeated repairs to the statue's nose, which was a first for the museum.