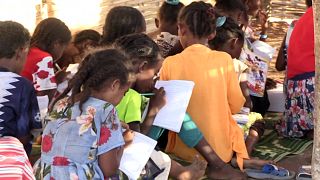 At a refugee camp in Sudan, children sing together in a classroom built from wood and straw.

The children are among tens of thousands who have fled their homes since Ethiopian Prime Minister Abiy Ahmed's government launched a military operation in the region of Tigray.

Ethiopian forces this week declared military victory in the region's capital, Mekele, after a "final" declaring a "final" military attack.

The region of six million people had been cut off as the military attacks, which started in early November, ensued. Humanitarian groups estimate that several hundred people have been killed.

Nearly one million people have been displaced, including the tens of thousands who fled to Sudan.