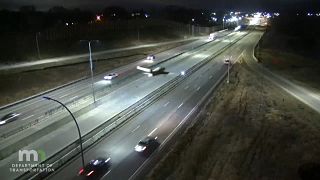 A small plane has crash-landed and hit a vehicle on a Minnesota interstate motorway.

Officials said the crash, which involved a single-engine Bellanca Viking plane, temporarily closed part of the highway on Wednesday night in the city of Arden Hills.

KMSP-TV reported that two people were on board.

The Federal Aviation Administration and National Transportation and Safety Board are investigating.