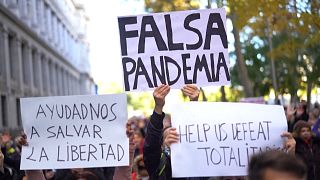 Hundreds of anti-vaccine demonstrators took to Madrid's Prado promenade on Saturday hitting out against the "fake pandemic" and the restrictions imposed by the Spanish authorities in an attempt to stem the spread of COVID-19.

It came after police in Spain last week made dozens of arrests during clashes with protestors for a second consecutive night as demonstrators took to the streets to denounce the new coronavirus restrictions.

In some cities, looting and vandalism broke out on the fringes of the protests.

The biggest disturbances were in Madrid where scores of demonstrators chanting "freedom!" torched rubbish bins and set up makeshift barricades on the city's main thoroughfare, the Gran Via, images on social media showed.

When police moved in to clear the gathering, they were pelted with stones and flares.

Spain last week imposed a nationwide nighttime curfew to try to halt the rise of Covid-19 infections and almost all of Spain's regions have imposed regional border closures to prevent long-distance travel.

Despite the many restrictions imposed in Spain since July, when the number of cases began rising again, infections have spiralled. The virus has killed more than 35,000 people in Spain and infected more than 1.1 million.