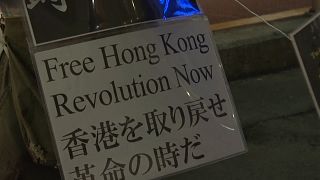 Protesters in the Japanese capital, Tokyo, formed a human chain in a so-called "stand with Hong Kong" demonstration, calling on their government to take a firm stance against China's imposition of strict national security laws over the former British territory.

More than 50 people stood in front of a popular train station in Tokyo on Sunday, holding banners in support of Hong Kong's pro-democracy movement.

The central government in Beijing imposed the national security law on the semi-autonomous Chinese territory after city leaders were unable to get one passed locally.

Hong Kong has faced mounting international pressure following Beijing's implementation of the law which has been viewed as an attack on the "one country, two systems" framework under which the city has been governed since its return to China in 1997.

Inspired by a historic protest more than 30 years ago in the Baltic states when nearly 2 million people formed a human chain to protest Soviet control, Ho Ka Hin, a 21-year-old Hong Kong resident who is studying in Japan, organised Sunday's demonstration in Tokyo.

The protest also resembled a human chain created by Hong Kong's pro-democracy movement on both sides of the city's harbour a year ago.

Due to the coronavirus pandemic, demonstrators maintained a certain distance apart from each other and wore face masks as they formed the chain.