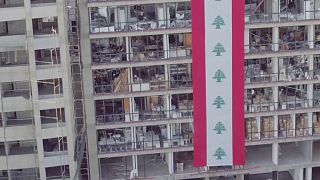 Drone footage has given a view of the devastation caused by the August 4 explosion in the Lebanese capital of Beirut.

The explosion, apparently caused by a massive stock of poorly stored ammonium nitrate, tore through the capital, killing at least 180 people and injuring 6,000.

The head of Lebanon's customs authority was formally arrested on Monday after being questioned about the massive explosion in Beirut earlier this month, the state's National News Agency reported.

Some 40,000 buildings were damaged, 3,000 residential structures were badly damaged and at least 2,000 doctors were injured or their clinics were destroyed.