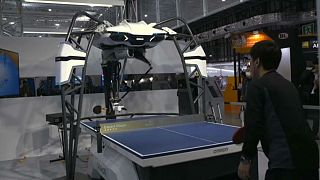 Ping-pong-playing robots and other gadgets from Tokyo showcase

But amid all the gadgetry this year, the expo's theme is clear: making robots that will help humans bridge the pathway to a "friendlier society".

It's equipped with state-of-the-art sensing equipment which allows it to detect the movements of the human player, their paddle, and the ping pong ball simultaneously.

It does all this at high speeds, and with a high degree of accuracy.

Another evolving technology is on display nearby, at the Kawasaki booth.

This year, the company is demonstrating "Kaleido", a humanoid robot standing 184 centimetres tall and weighing 85 kilograms, which is built to travel to places humans cannot.

According to Associate Officer Toshiya Okuma, the robot is in its 6th generation, with the 4th iteration having been displayed at iREX in 2017.

He explains that Kaleido is made to be sturdy and easy to repair, and is part of various robotics programs at several Japanese universities.

He foresees many future applications.

By making the robot in humanoid form, it's able to use existing equipment and tools that humans use, negating the need for specialized equipment and widely expanding the roles that the robot can take.

While "Kaleido" has a focus of going places inaccessible to humans, another robot - this time made by Panasonic - is aimed at improving human access.