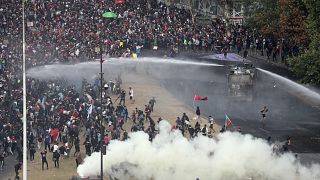 Protesters clashed with police on the streets of Santiago on Monday (November 4), amid ongoing public anger that began with an increase in the price of metro fares.

Riots, demonstrations and acts of arson, much have reflected larger and long-simmering anger at the government's failure to alter Chile's economic course despite growing inequality, have resulted in at least 18 dead and 7,000 arrests, prosecutors said.

Chile's newly appointed finance minister, Ignacio Briones, said on Monday the economy will likely grow between 2.0% and 2.2% in 2019, down from a prior forecast for 2.6% growth following more than two weeks of protests in the Andean nation.

Chile is one of Latin America's wealthiest nations, but also, among its most unequal.

Frustrations over the high cost of living in Santiago have become a political flashpoint and have prompted calls for reforms on everything from the country's tax and labour codes to its pension system.