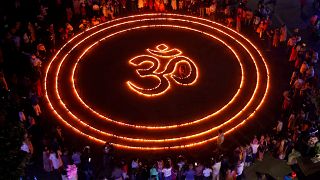 Hindus across India celebrated Diwali on Sunday (October 27) by illuminating their homes with lights and candles and offering prayers.

The prayers were marked by traditions such as worship of the Goddess of wealth, Lakshmi, hoping for prosperity. It is believed that Lakshmi showers her blessings upon those homes that are clean and well-lit.

The festival of lights is traditionally ushered in by setting off firecrackers and cleaning, decorating, and illuminating houses.

On this occasion, people dress up in traditional clothes and exchange gifts. The prayers are usually followed by a lavish feast and bursting firecrackers.

The festival marks the return of Hindu God Prince, Rama, his wife Sita, and brother Laxman, to his hometown of Ayodhya after 14-years of exile, defeating demon king Ravana. According to Hindu scriptures, the residents of Ayodhya illuminated the whole city with millions of lamps and celebrated to welcome their rightful king, who brought prosperity with his reign.