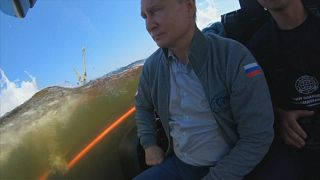 Russian President Vladimir Putin on Saturday dived to the bottom of the Gulf of Finland aboard a submersible to explore a Soviet submarine which was sunk during World War Two.

The Shchuka-class submarine Shch-308 sunk in October 1942 near the island of Gogland, west of St Petersburg.

Putin was pictured smiling in the underwater craft, a C-Explorer 3.11 submersible.

Its airtight glass bubble protected Putin, who first became Russian president in 1999 and has continuously ruled the country since 2012.