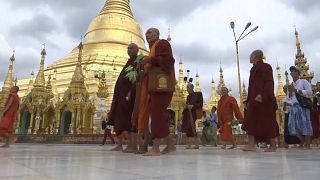 Monks march in Myanmar in support of firebrand preacher

Hundreds of monks and their supporters marched in Myanmar on Thursday to protest against the issuing of an arrest warrant for a high-profile, firebrand preacher for criticism of the government.

The sedition charge against Wirathu came after insulting comments he made at nationalist rally on May 5 about Myanmar leader, Aung San Suu Kyi.

The monk, based at a monastery in Mandalay, could be jailed for three years if found guilty.

Thursday's rally in Yangon saw supporters gather and pray at the Shwedagon Pagoda, the country's most sacred Buddhist site.

Many carried leaves of the Eugenia plant, which is seen by Buddhists in Myanmar as being auspicious.

Supporters called him a hero and denounced the warrant as an infringement of his right to free speech.

Wirathu came to prominence in 2012, after deadly riots broke out between Buddhists and Muslims in the western state of Rakhine. He founded a nationalist organisation, since disbanded, that was blamed for inciting violence against Muslims.

Time Magazine called him "The Face of Buddhist Terror" in a cover story in 2013.

More recently, Suu Kyi has been a major target of his wrath, while still continuing his anti-Muslim speeches.

The National Monks Council has previously ordered Wirathu to stop giving public talks. It instructed him to appear before them Thursday in Yangon, but late Wednesday postponed the meeting without explanation.