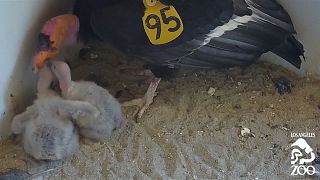 California condor chick numbers on rise thanks to innovative procedure

Los Angeles Zoo has come up with a unique way of expanding the population of the rare California condor.

Staff have been working on saving the condor for 30 years, and have now mastered how to fertilise its eggs.

The scavenging birds became so rare in the wild that the last 27 of the species were captured in 1987 and brought into captivity to try and save them from extinction.

The condors, which have a wingspan of up to 9 feet (274 cm), were reintroduced into the wild in the early 1990s but still the numbers didn't grow at an exponential rate.

This is because the condor in the wild only gives birth to one fertile egg a year and that offspring is looked after by two parents.

This year, the zoo has incubated 6 eggs and placed them with three sets of condor parents with great success.

The California condor's numbers in the wild dwindled after human settlement in California, because of poaching, lead poisoning from shot animals they feed on and egg collectors at the beginning of the 20th century. The species is the only surviving bird in the Gymnogyps genus and can live up to 40 years old.

With egg collecting a thing of the past and new laws brought in banning lead in hunter ammunition, the species now has a chance to survive in the wild.

There are now around 500 California condors left in the world.