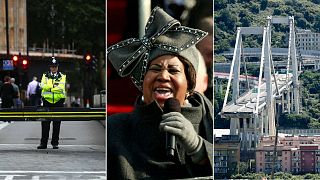 Fast news: The week in a minute

We take a 60-second look at the biggest stories hitting headlines around the world this week.

The death toll in the Genoa bridge collapse has risen to 39 on Wednesday, according to Italian authorities.

The collapse of the Morandi Bridge has astonished the world. Rescue teams continued to search for survivors amid tons of concrete debris and twisted steel, with more bodies being recovered.

Police and demonstrators clashed on the sidelines of a white nationalist rally in the heart of Washington, last Sunday, with police spraying the demonstrators to quell the violence.

Nine people were injured, one critically, on Tuesday when a natural gas explosion leveled a Denver apartment building, a fire department spokesman said.

Tens of thousands of protesters rallied against the ruling Social Democrat (PSD) government on Friday in cities across Romania and the capital Bucharest, where riot police scuffled with some and fired tear gas.

Hundreds injured as Spanish festival platform collapses into the sea

Afghan troops backed by U.S forces gained control of most of the embattled city of Ghazni on Tuesday, officials said, after days of heavy clashes against Taliban insurgents.

After five days of fighting, video footage showed Ghazni, a strategically vital centre two hours from Kabul on the main highway between the capital and southern Afghanistan, as a city of burnt out markets and buildings. Smoke was still rising above the low skyline, as further military reinforcements arrived.

Rescue operation in India's flood-hit Kerala with more rain due

Tens of thousands of people in the Indian tourist state of Kerala were stranded on Thursday as waters rose amid extensive flooding and one of the state's main airports remained closed.

Supporters of Brazil's imprisoned former President Luiz Inacio Lula da Silva marched through the streets of Brasilia on Wednesday on their way to the Supreme Electoral Court to support da Silva candidacy for the presidency.

Thousands of star-gazers held a vigil in the early hours of Monday at one of the darkest spots in Israel, hoping to catch sight of a "shooting star" during the annual Perseid meteor shower.

Heavy rainfall hit Kiev on early hours of Thursday, causing flash floods on streets and underground passageways. Cars were seen driving half-covered in water in the city centre at night as the water level reportedly reached one meter in some areas.

"Life will carry on," said London commuters after parliament incident

London commuters remained defiant on Tuesday after a man deliberately drove a car into pedestrians and cyclists before ramming it into barriers outside Britain's parliament square.

An explosion in a residential building thought to be storing weapons and ammunition in Syria's rebel-held Idlib killed at least 39 people including 12 children on Sunday, a war monitor said.

The 175th anniversary of Copenhagen's Tivoli was celebrated with a 15-minute firework display on Wednesday evening.

Denmark's Crown Princess Mary attended the celebrations which also featured a fountain light show and a performance by the New York City Ballet.

Fans pay tribute to Aretha Franklin at her Hollywood star

Fans paid tribute on Thursday to Aretha Franklin at her star on the Hollywood walk of fame after the 'Queen of Soul' died at the age of 76.

Franklin, who won 18 Grammy Awards and had some 25 gold records, died at her home in Detroit surrounded by family and loved ones, her publicist said.

Watch 'Fast news: The week in a minute' in the player above.