The announcement by the British government that the colour of UK passports will change from burgundy red to navy blue after the UK leaves the European Union has prompted a series of emotive exchanges on both sides of the Brexit debate.

The weekend has seen ministers attack an exaggerated claim over the scheme’s cost, while critics have rounded on what they argue is a publicity stunt based on misinformation and fueled by nostalgia.

In a move that will see the UK diverge from EU standards after its departure from the bloc, from October 2019 new UK passports will have blue and gold covers, instead of the standard burgundy commonly used by EU countries.

The government said the initiative would symbolise the restoration of British national identity. “Leaving the EU gives us a unique opportunity to restore our national identity and forge a new path for ourselves in the world,” Immigration Minister Brandon Lewis said. “That is why I am delighted to announce that the British passport will be returning to the iconic blue and gold design after we have left the European Union in 2019.”

A close aide to Theresa May has since attacked as “fake news” a claim – widely shared on social media - that changing the colour of the passports would cost 500 million pounds (563 million euros).

The assertion by a well-known entrepreneur was slammed by Lewis as “factually wrong”. The prime minister’s Director of Communications Robbie Gibb said people who “deliberately misrepresent public policy for political gain… should be called out”.

The cost that was quoted in fact covers the whole production process for redesigned passports under a contract to run for over a decade.

James Caan, a businessman best known for appearing on a popular TV programme, withdrew his original tweet but repeated his assertion that the country should be prioritising issues such as child poverty and homelessness.

However, the government has also been criticised for the patriotic tone in the promotion of the scheme – while claims that the UK had been forced to accept the burgundy colour favoured by the EU have been rebutted.

The government says it intends to take advantage of the fact that after Brexit, the UK travel document will no longer have to conform to EU standards. The Sun heralded the announcement as “a stunning campaign victory” for the pro-Brexit newspaper, which had demanded the abolition of the EU’s burgundy model, “enforced on the nation from 1988”.

However, as it became clear that there was no Brussels legislation forcing burgundy on EU countries, the European Parliament’s chief Brexit coordinator Guy Verhofstadt tweeted that the UK could have chosen any passport colour it wanted as a member state.

A 1981 European Council resolution recommended burgundy red for passports in the EU but it was non-binding on nations.

Verhofstadt later tweeted a tongue-in-cheek comment that the EU would have introduced standard blue passports had it known that they were “so important to the UK”.

Meanwhile, a former aide to Margaret Thatcher attacked the clamour for the old-style travel document as Eurosceptic-driven “nostalgia”. The Guardian reported that Charles Powell said the government “chose” to ditch the blue passport in the 1980s, under no pressure from the EU.

The newly designed passports, which will be phased in, represent a return to the British document’s original appearance with the colour first used in 1921 - though some commentators have pointed out that more recent passports were in fact black.

The announcement brought a torrent of praise from Brexit supporters.

Conservative MP Andrew Rosindell wrote an article for Sky News saying the new design was a powerful symbol of Britain’s “independence from Brussels”, tweeting that “fanatical Remainers hate it”. Earlier this year he described the burgundy EU passport as a source of national “humiliation”.

But several opposition politicians scorned the move, dismissing it as irrelevant – and highlighting areas where they argue the UK’s departure from the EU will do damage. 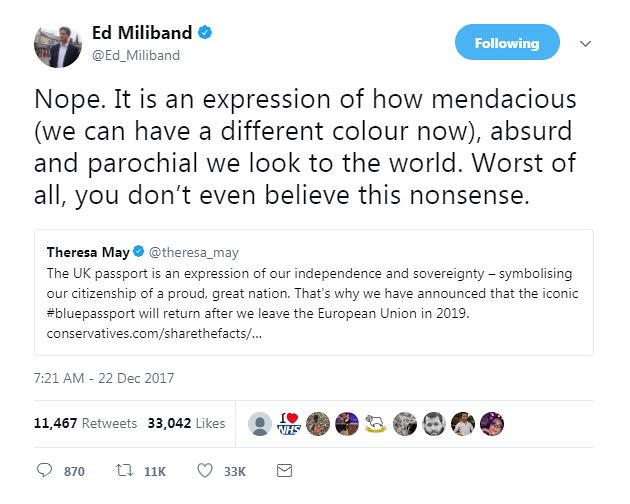 Labour MP Chuka Ummuna tweeted to say none of his constituents had written to him to demand blue passports, whereas they did want to know how Brexiteers’ promises on funding for the NHS would be honoured. Others pointed out that the EU passport guaranteed free movement across all member states – a right the new UK document is far from certain to authorise.

The British government says current UK passport holders will not have to do anything ahead of the document’s renewal date. For the first few months after Brexit in March 2019, burgundy passports will continue to be issued but “with no reference to the European Union”.