The monumental supreme court of Belgium, a seven hundred thousand cubic meter stone palace erected at the height of the country’s prosperity in the 19th century, is a building on the verge of collapse, a state of affairs that some see as a symbol of Belgium’s dysfunction and disintegration.

There’s one thing architects and politicians have in common: they both love big, expensive projects.

Considered to be the eighth wonder of the world by its architect Joseph Poeleart, the Belgian Palace of Justice was completed in 1883 after almost twenty years of difficult and expensive construction. Even 134 years later, it is still in use as Belgian’s highest courthouse and hears court cases on a daily basis.

Erected on the Galgenberg (Dutch for Gallows Hill), where hundreds were hanged for crimes in the Middle Ages, the Palace of Justice towers over all the city, larger in size than St. Peter’s Basilica in the Vatican City.

At the time, it was the largest building in all of Europe and a colossal emblem of an expansive, modern Belgian state.

“Dozens of staircases, endless corridors, the grotesque statues – it’s obvious that whoever designed this building was completely insane,” said Christian, 42, who runs a newspaper and snacks stall in a corner of the Palace’s massive central hall.

“Still, it is a beautiful place to work.” 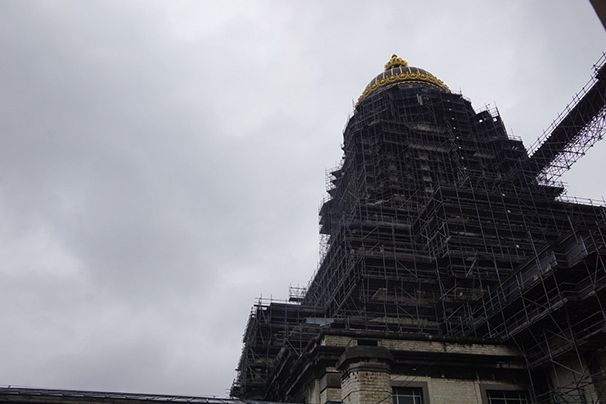 However, the building underwent no major structural renovations after World War II, and consistent neglect has nonetheless pushed the building into a state of dilapidation, inside and out.

Most of its 120 metre facade, once described by Sigmund Freud as an entrance fitting of “a great Assyrian palace,” is completely obscured by rusted metal scaffolding, first put in place in 1982, designed to hold in place loose stones from the extravagant 104 metre copper dome that tops the building.

As the saying goes in Brussels, even the scaffolding today has its own scaffolding.

Belgian work safety inspectors have perennially released reports that reveal how the building is out of line with the country’s safety codes, citing the explosive risks posed by the building’s corroded gas pipes and the underground store of petrol stocks.

Most recently, sections of the building that house police evidence related to ongoing terrorist investigations were closed due to mold and fungal invasions. Court cases and trials related to the evidence have been delayed as health inspectors test and analyze the mold.

The architectural complexity of the building – there are an estimated 280 rooms and nearly 5000 steps – certainly affords no favors to public authorities responsible for the building’s management.

“Renovation takes a great deal of time because of the vast size of the building and budgetary constraints. The restoration is also to be carried out while the courts continue to operate in the building, with some two thousands staffers, judges, visitors, and witnesses present everyday,” said Johan Vanderborght, a spokesman for the Régie des Bâtiments, the federal agency entrusted with the building’s management and renovations.

Lawyers are divided whether the dilapidated court should remain in use or be retired as a public monument, citing the estimated costs of over 100 million euros to finish renovations by 2028. 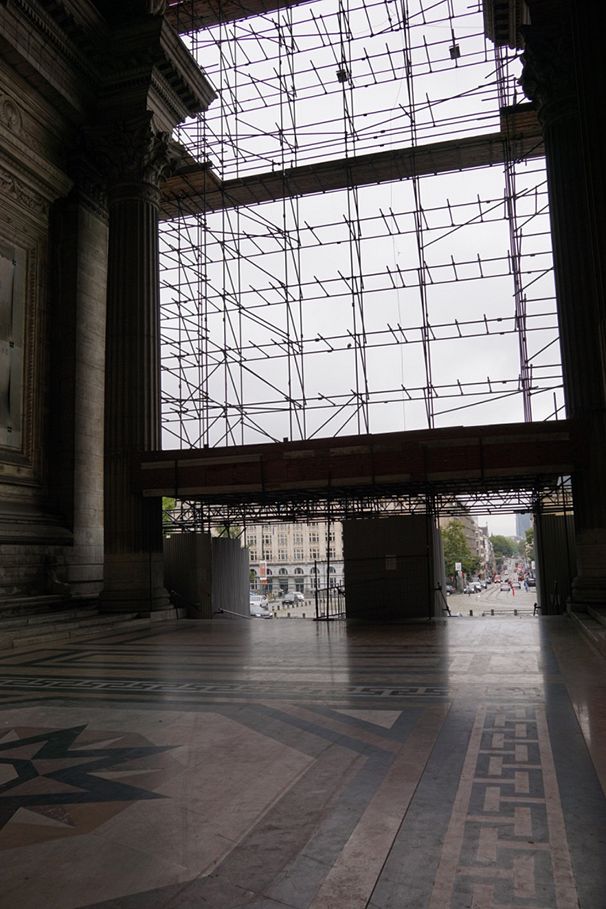 “Obviously, if it’s a great deal of public money [to finish renovations] then it should be questioned because there is a lack of funds for many important purposes in the country,” said Nicolas Cohen, a human rights lawyer at the firm Jus Cogens in Brussels.

Despite the decentralization of Belgium into its constituent regions of Flanders and Wallonia through the 20th century, the administration of justice has remained one of the few competences held onto by the federal government in modern Belgium.

However, it is no secret that the Palace of Justice’s disrepair speaks to the sharp regional divisions within the country.

“It is true that some politicians in Belgium have an interest in the dysfunction of national justice. On top of that, money pours into the regions rather than federal institutions because the politicians are most concerned with reelections,” said Joris Snaet, an architectural historian for KULeuven, Belgium’s oldest university.

Snaet, a former employee at the federal Régie des Bâtiments for over ten years, also described the slow and steady dilapidation of other cultural monuments in Belgium, such as the Royal Museum of Middle Africa in Tervuren and the Belgian Old Masters’ Museum, where priceless Flemish masterpieces have been removed from the wall because of damage from a leaking roof.

“The problem is honestly inside the minds of managers, the project managers, and the architects. They all want big, expensive projects, and politicians aren’t prepared to spend taxpayer money on small restoration work. That’s just the system behind it,” he said.

“It’s much easier to fix small holes and problems in the structure over time, naturally. But if there’s one thing that architects and politicians have in common it’s this: they both love big, expensive projects.”

Renovations on the facade of the Palace of Justice are expected to end by 2028, at which point the Belgian government will have finished a consultation on the future purpose of the building.