As the number of sharks in popular U.S. tourist destinations was set to rise, experts say the chance of being attacked by the animals is minuscule and the odds of a fatal encounter are even lower.

These things are more likely to kill you than a shark

Statistically, there is more chance of being killed by an asteroid than by our razer-toothed friends. 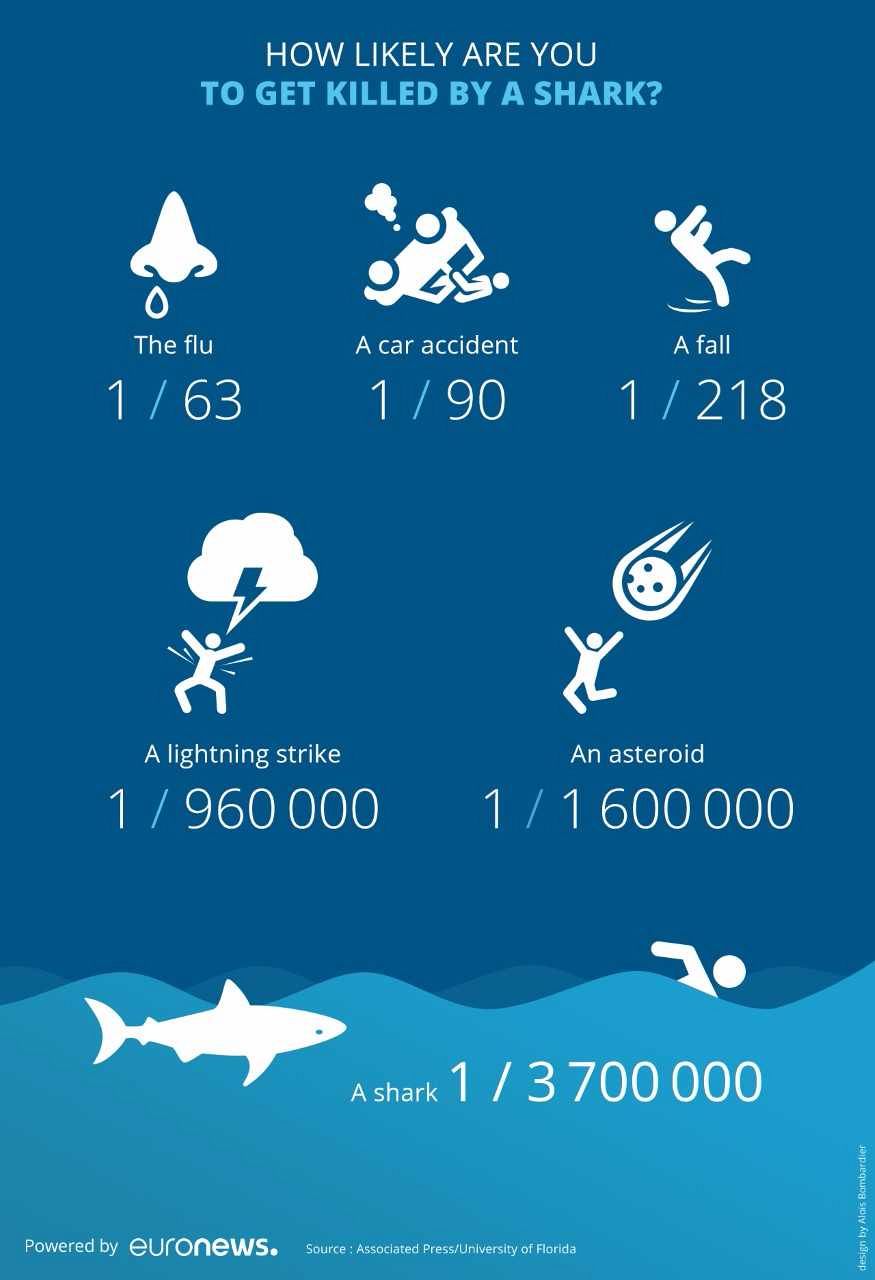 Of course, the odds differ depending on where you are swimming: There have not been any unprovoked shark bites in the UK since records began in 1847, whereas there were 53 unprovoked shark attacks in the U.S. in 2016 alone, however, none were fatal.

What you’re doing in the water also plays a part in the odds. Unsurprisingly, surfers tend to suffer the most attacks, with nearly six in 10 of last year’s instances in the U.S. involving people practising board sports. Surfers frequent areas where waves break, which is also a favourite spot for sharks.

Those swimming and wading in the sea accounted for one in three attacks, while snorkelers and people using floatation gear combined made up 8.6 percent of all U.S. attacks. However, putting this into perspective, scuba divers are nearly 7,000 times more likely to be hospitalised for decompression sickness than for shark bites, according to a 2015 Stanford University study.

15 sharks swim close to paddleboarders on the California coast.

If the risk is so small, why are humans so terrified of sharks?

Gregory Skomal, a shark expert with Massachusetts’ Division of Marine Fisheries, explains that we “ have evolved an acutely tuned sense of survival that alerts us to potential threats”.

Despite the low probability of coming into contact with a shark, not least one that will kill us, he says that there’s a deep-seated fear in all humans of being bitten by some animal, whether on land or in the sea.

“The ocean looks dark and deep and foreign to us. It embellishes that fear,” according to Skomal.

How can I reduce the risk of a shark attack?

While the knee-jerk reaction from a community when a shark attack occurs is to call for a cull, George Burgess, director of the Florida Program for Shark Research, says there is “ virtually no chance to catch the highly mobile offending individual” to exact revenge.

“Sharks are low-density, highly migratory animals that readily recolonize areas denuded of their kind, rendering any attempt to cull an ineffective strategy,” he continued.