Li Hongbo has taken art to a whole new level of amazing detail and precision. In his latest exhibition he makes colourful guns. And they are all made out of paper.

“I discovered the flexible nature of paper through Chinese paper toys and paper lanterns,” Li told Reuters. “Later, I used this principle to make a gun,” he said, casually riffling a crude paper pistol into an elegant fan. “A gun is solid, used for killing, but I turned it into a tool for play or decoration. In this way, it lost both the form of a gun and the culture inherent to a gun. It became a game.”

The piece is a comment on gun control. “With the global proliferation of weapons, we now sit on powder kegs,” Li has said. “The international making and trading of guns is a colossal business, yet superpowers argue that having big guns is a deterrent to proliferation. We have only created more sophisticated killing machines that take lives as easily, and as effortlessly, as picking flowers.” 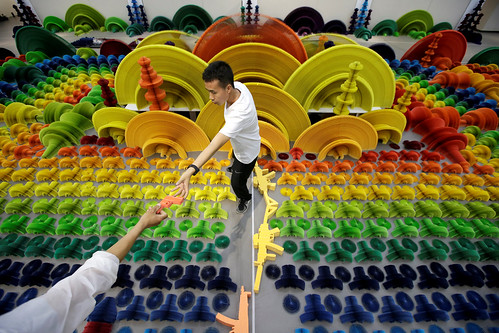 The Chinese uses glue to painstakingly stick sheets of paper together into blocks. He then makes sculptures out of the blocks of paper. After using a drill and angle grinder the sculpture eventually takes shape.

The result is a piece of art that can be stretched and distorted into various shapes.

Best known for his lifelike paper sculptures, made entirely out of paper and glue. His work has been exhibited in museums around the world. His works were displayed at Ludwigsburg Museum in Germany (2013), the 18th Biennale of Sydney in Australia (2012), and Klein Sun Gallery in New York (2013).

Ocean of Flowers was originally presented at the 18th Biennale of Sydney in 2012, and is now on show again at Beijing’s Eight One Art Museum.