Police in Manchester have named a man they suspect of carrying out Monday night’s bomb attack at Manchester Arena which claimed at least 22 lives.

Reuters had earlier reported that US intelligence officials had revealed Abedi’s name and that he had travelled to Manchester from London by train.

Earlier, ISIS claimed responsibility for the bombing although this claim has yet to be confirmed.

The attack, which happened after an Ariana Grande gig at Manchester Arena in northern England, also wounded 59 people.

May said ‘many’ had life-threatening injuries.

The attacker “detonated an improvised explosive device” and died at the scene, say police, but it is not clear whether he was acting alone or as part of a militant group.

ISIS’ claim of responsibility, which was made in a statement posted on telegram, read “One of the soldiers of the Caliphate was able to place an explosive device within a gathering of the Crusaders in the city of Manchester.”

May condemned the attack, saying it stands out for its “appalling, sickening cowardice”.

“As we experienced the worst of humanity in Manchester last night, we also saw the best.

“The cowardice of the attacker met the bravery of the emergency services and the people of Manchester.

“The attempt to divide us met countless acts of kindness that brought people closer together.

“The images we hold in our minds should not be of senseless slaughter but of the ordinary men and women who put concerns about their own safety aside and rushed to help.”

Panic and chaos followed the blast on Monday evening as thousands of mainly teenage fans tried to escape the arena.

“It happened so quickly. It was really scary” https://t.co/uM1vulqxzK

“It was a huge explosion – you could feel it in your chest. It was chaotic. Everybody was running and screaming and trying to get out,” said one witness.

It appears to have been centred on the arena’s box office.

“We believe, at this stage, the attack last night was conducted by one man,” Manchester Chief Constable Ian Hopkins told reporters.

“The priority is to establish whether he was acting alone or as part of a network.

“We believe the attacker was carrying an improvised explosive device which he detonated causing this atrocity.”

Witnesses said they noticed the floor was covered with nails, nuts and bolts. Paramedics confirmed they had treated some of the wounded for “shrapnel-like injuries”.

Greater Manchester Police quickly secured the area, including the nearby Victoria train station where all trains were cancelled.

Some hours later, a precautionary controlled explosion in the Cathedral Garden area of the city was carried out. Police have now confirmed it was not a suspicious item. 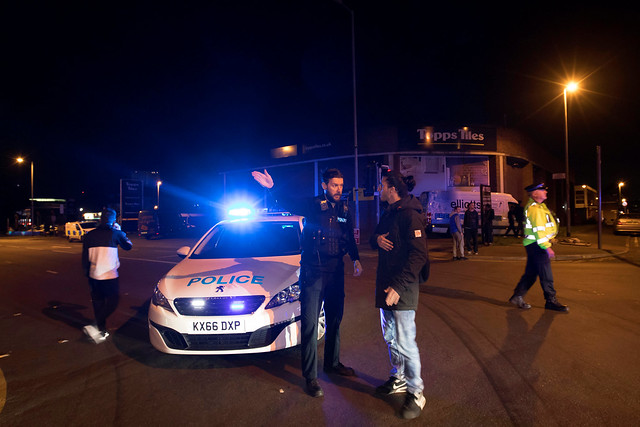 Dozens of people were taken to hospitals across the city for treatment.

Desperate family and friends continue to use social media to try to locate missing teenagers.

The bombing, the deadliest since those on the London transport network in July 2005, saw Britain’s main political parties suspend their general election campaigns.

The current terror threat level in the UK remains at ‘severe’, the second-highest, meaning an attack by militants is considered likely.

Manchester Arena, the largest indoor arena in Europe, opened in 1995 and has a capacity for 21,000 people, according to its website. It is a popular concert and sporting venue.

broken.
from the bottom of my heart, i am so so sorry. i don't have words.

I'm heartbroken over what happened in Manchester tonight.
Sending love to everyone involved. H