At 2:30pm local time, at least one explosion tore through the central St Petersburg Metro system.

Initial reports suggested there had been two simultaneous blasts, in at least two locations. However it is now reported that only one explosion took place.

The blast appears to have taken place in the tunnel between two stations. The confusion after such an event is likely the reason for the confused initial reports.

Another explosive device, described as an “IED” (improvised explosive device) was discovered at the Ploshchad Vosstaniya metro station, and was made safe. Photographs shared on social media appear to show a bomb hidden in a fire extinguisher, surrounded by ball-bearings or a similar material, used to create shrapnel damage.

Russia’s state prosecutors have opened a criminal case over the explosion, with the charge of a “terrorist act”. The Investigative Committee says despite this initial charge, it will continue to consider all possible causes of the explosion.

The blast took place at the Sennaya Ploshchad metro station, which serves the central Sennaya Square. It was known as “Peace Square” between 1963 and 1991, and is located near the city’s St Isaac’s Cathedral.

Russia’s Health minister Veronika Skvortsova confirmed that at least 14 people have been killed by the explosion, and as many as 45 have been injured.

Russian authorities are still working on confirming the identity of the attacker, whether the person acted alone, or indeed, if the attack was a suicide bomber.

He was identified as 22-year-old Akbarzhon Jalilov from the city of Osh by a spokesperson for Kyrgyzstan’s GKNB security service.

A senior security official in neighboring Kazakhstan described the suspect as a Russian citizen with Central Asian origins.

A man some Russian media previously identified as responsible and published photographs of has come forward. He says he has nothing to do with the explosion.

Police have not identified the wanted pair, but Interfax quote their source as saying: “Two people are being sought on suspicion of planning the blasts, one of whom is thought to have placed the explosive device in the metro wagon and the second person for leaving a bomb at the metro station ‘Ploshchad Revolutsii’”.

Russian authorities say that “all possible causes” are being investigated, though President Putin was in St Petersburg, meeting with Belorussian leader Lukashenko, and some have questioned whether the presence of the Russian leader was the reason behind the explosions.

Authorities including the FSB are investigating the blast. 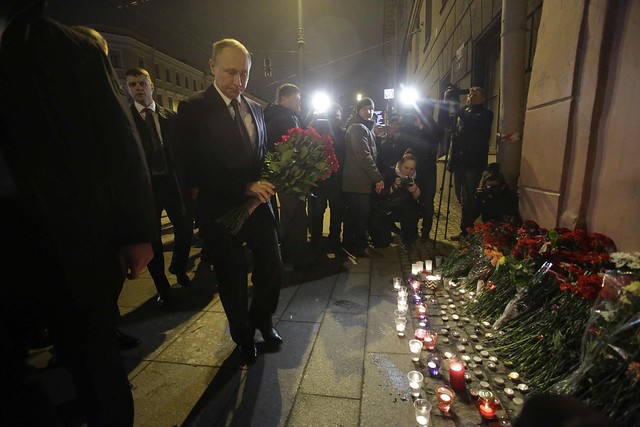