Around ten people have been killed and around 40 injured after an explosion tore through a train carriage in St Petersburg’s metro system, Russian authorities say.

The country’s Interfax news agency said Monday’s explosion, which tore through a train carriage, could have been caused by a shrapnel-filled bomb packed inside a briefcase.

The blast took place at around 2:40 pm local time as the train was travelling between Sennaya Ploshchad and Tekhnologichesky Institute stations in the centre of the city.

Interfax also said surveillance cameras may have captured images of the person suspected of organising the deadly explosion.

The device was apparently found at the “Ploshchad Vosstaniya” metro station, a different location from the earlier blast.

All the city’s metro stations were closed following Monday’s explosion.

Officials say that extra security measures have been introduced at St Petersburg’s airport, while security has also been boosted on the metro in Moscow.

Russian President Vladimir Putin, who was in the city and had been holding talks with Belarus’ president Alexander Lukashenko, said authorities are trying to establish the cause of the blast. He has said everything is being considered, including terrorism.

The Russian leader also expressed his condolences to the families of the victims.

Video showed injured people lying bleeding on a platform, some being treated by emergency services. Others ran away from the platform amid clouds of smoke.

Russia has been the target of attacks by Islamist militants in the past and remains on high alert with fears of further strikes.

Putin, as prime minister, launched a 1999 campaign to crush a separatist government in the Muslim southern region of Chechnya, and as president continued a hard line in suppressing rebellion.

ISIL, which has drawn recruits from the ranks of Chechen rebels, has also threatened attacks across Russia in retaliation for Russian military intervention in Syria.

Russia’s air force and special forces have been backing President Bashar al-Assad in fighting rebel groups and Islamic State fighters now being driven out of their Syrian strongholds. 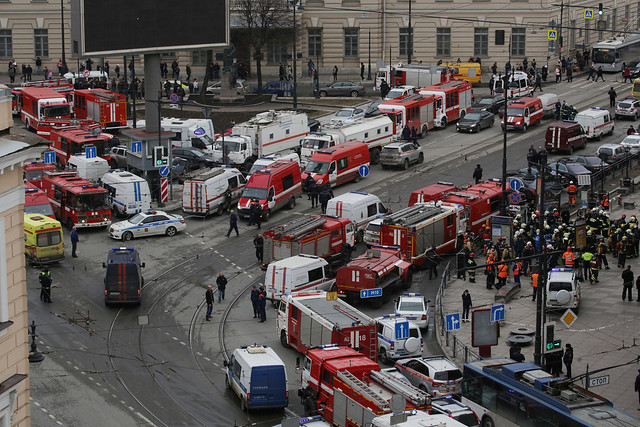