Predicting the future is a recurring motif in popular culture, with visions ranging from uncomfortably accurate to laughably unrealistic.

It turns out that during the Cold War both the USSR and the US had a go at imagining 2017.

One tells a story of reality TV in a collapsed world, the other an ordered universe in which man has control of everything including the weather.

In the opening sequence of “The Running Man” starring, (who would have predicted it?) future California Governor Arnold Schwarzenegger, there is already some surprisingly accurate speculation along with some more far-fetched and humorous hypotheses.

What would #Althusser make of this?…

2017 predicted in The Running Man? We're living in it https://t.co/NPtQfNxyvO via ConversationUK</a></p>&mdash; Jim Slaven (JimSlaven) January 3, 2017

It begins with the not wholly unfamiliar words, “By 2017 the World Economy has collapsed”, before explaining that “food, natural resources and oil are in short supply”.

A totalitarian regime “rules with an iron hand” using a media apparatus designed to subdue the people and weed out dissent.

The plot, based on a novel by Stephen King, hinges upon what we would now class as a reality TV show somewhere between “The Apprentice” and “The Hunger Games.” Rather astonishingly, the world’s most powerful man is the host of this reality TV show. He is portrayed as a terrifying, clown-like-figure, fuelling up crowds with populist sentiment (remind you of anyone?), as they watch political prisoners fight to the death against futuristic gladiators.

Roses are red
The Beatles were a band
You know science fiction can be prescient like in THERUNNINGMANpic.twitter.com/eq6aXZ2Ctl

Though this formulaic, 1980s action film inevitably got a lot wrong, it did also foresee a kind of internet known as the “infonet”, an obsession with choreographed aerobics, and voice-controlled technology as well as the existence of “jet packs”. The “Flyboard Air” has already had successful test launches.

Overall, what the film gets right is the Orwellian warning about how easy it is to enforce political will with propaganda in a world where the lines between news and entertainment are blurred by “infotainment”.

Happy 2017! Remember, The Running Man was set this year. Things are looking up! #nye2016pic.twitter.com/ASqear3nyS

The rise of right-wing populism has led to what some commentators are calling a “post-truth era”. In the film, one prisoner parallels this: “The truth hasn’t been very popular lately”.

You can watch the film trailer here

This year also marks the 100th anniversary of the Bolshevik Revolution. ‘In the year 2017’ is a Soviet film-strip produced by Diafilms in the 1960s. Like “The Running Man” this piece has some moments of impressive prescience as well as plenty of hunches that did not quite stand the test of time. The overly optimistic anticipation of an omnipotent, utopian Soviet Union being the main one.

The filmstrip’s characters travel from The Black Sea to Siberia in minutes on ‘nuclear trains’ and the protagonist’s father is a meteorologist who is able to harness and change the weather.

At a time when the Soviet Union had just sent the first satellite and animal into space, in Sputnik 1 and 2 and was about to make Yuri Gagarin the first man in space, it is easy to see where the optimism about technology came from. 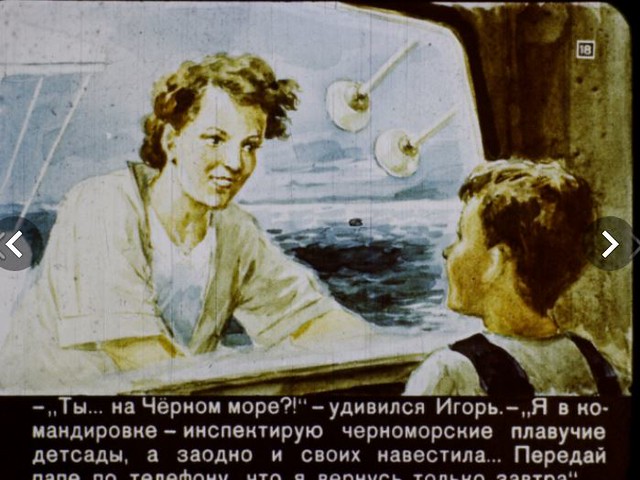 The filmstrip follows a schoolboy, Igor, and his family enjoying some of the technological advancements one hundred years of the Soviet Union has brought them. It culminates with Igor’s father helping to save hundreds of innocent civilians using a flying, weather-controlling, power-station because:

“The last remaining imperialists, hiding on a remote island, have tested a banned meson weapon. During the test, there was an explosion of unprecedented strength, which destroyed the entire island and simultaneously created atmospheric disturbances around the planet.”

Some incredible foresight comes in the form of the “televideo-phone” which is basically a desktop computer with Skype or Facetime, a cooking device resembling a smart fridge and what appear to be driverless cars.

The filmstrip’s obsession with (nuclear) transport is also unsurprising given the success of Soviet-era rail-expansion and the fact that the national airline, Aeroflot, was the largest in the world until the USSR’s collapse.

More on the cartoon strip here

What is common to both “The Running Man and “In the year 2017”, are concerns about how the planet will deal with dwindling resources, deadly climatic events and the threat of political extremism. With the rise of fascism across Europe and the impending threat of climate change, maybe, in their own contrasting ways, they were not so far off the mark after all.