Beijing has reacted defiantly to claims that it appears to have installed weapons, including anti-aircraft and anti-missile systems, on all seven of the artificial islands it has built in the South China Sea.

A US think tank cited new satellite imagery in making the claims.

The Asia Maritime Transparency Initiative at the Center for Strategic and International Studies said it had been tracking construction of hexagonal structures on Fiery Cross, Mischief and Subi reefs in the disputed Spratlys chain since June and July.

“It now seems that these structures are an evolution of point-defense fortifications already constructed at China’s smaller facilities on Gaven, Hughes, Johnson, and Cuarteron reefs,” it said citing images taken in November. 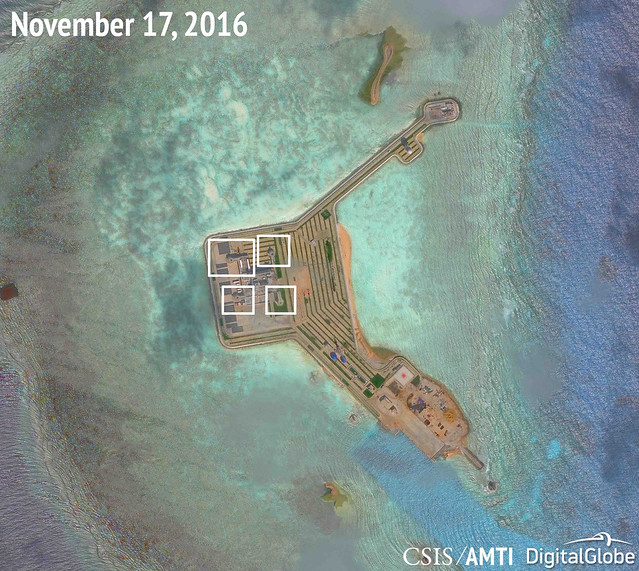 China has always denied that it has any intention to militarise the islands in the strategic trade route, where territory is claimed by several countries.

However Beijing said on Thursday that, while its construction on islands and reefs in the South China Sea was mainly for civilian use, what it called “necessary military installations” were “legitimate and lawful”.

“China’s building of facilities and necessary territorial defensive facilities on its own territory is perfectly natural – the normal right of a sovereign nation under international law.”

China claims most of the South China Sea. But Malaysia, Brunei, the Philippines, Taiwan and Vietnam have rival claims.

The United States has pressed its demand for freedom of navigation by conducting periodic air and naval patrols near Beijing’s maritime outposts.

The US has called on China to respect the findings of the arbitration court in The Hague earlier this year which invalidated its vast territorial claims in the strategic waterway.