With his back against the wall with an upcoming referendum on constitutional reform, the Italian Prime Minister decided to remove the EU flag from a Q and A event on Facebook.

While taking part in an online call to League and Five Stars nationalist voters at his official office in Palazzo Chigi, Rome, Matteo Renzi pointedly removed the EU flag.

He spoke in front of six Italian tricolours instead of the usual combination of a European Union flag, an Italian one and the Italian Council of Ministers’ flag.

The 41-year-old faces the biggest test yet of his political career on December 4, when Italy votes on changing the constitution, a ballot seen in the eyes of some as a vote on the country’s membership of the 28 nation bloc.

Renzi has reiterated that he will quit if he loses the vote.

Here is an appearance featuring Renzi last June in a previous event. 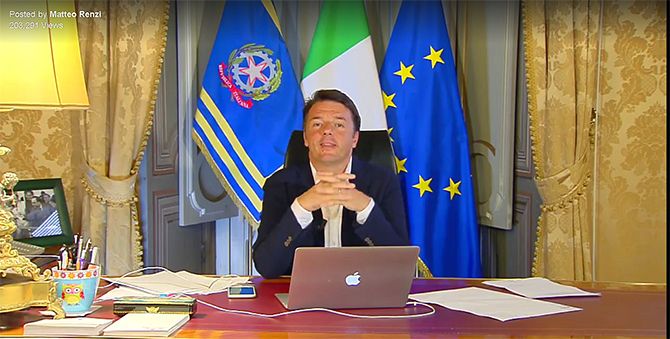 Here he is last Saturday, minus the EU flag.