An inflatable boat hangs down and 14,000 life jackets cover the pillars of a Berlin concert house in an art installation by Chinese dissident Ai Weiwei, aimed at highlighting the plight of refugees risking their lives to flee to Europe.

I really feel very proud that Germany has acted very civilized...to receive those much less fortunate and desperate people 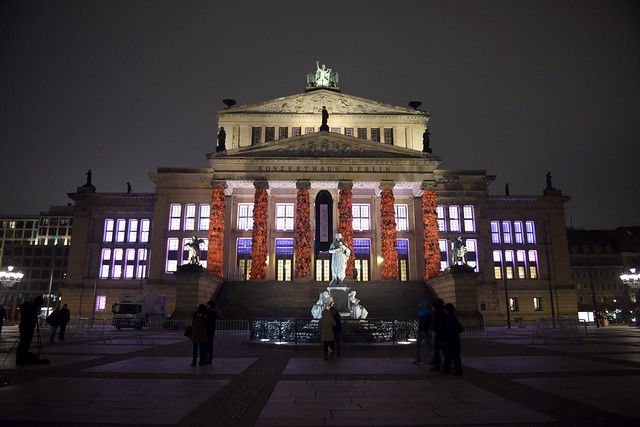 All used by migrants, the rubber boat and the thousands of orange life vests are on display at the Konzerthaus concert hall in the German capital.

The discarded life jackets were recovered from beaches on Lesbos. More than half a million people fleeing Syria, Afghanistan, Iraq and other countries plagued by war and poverty in the Middle East and Africa have arrived on the Aegean island since last year hoping to continue to northern Europe.

As Berlin celebrates its International Film Festival, Ai Weiwei’s memorial project commemorates refugees who have drowned on their way to Europe.

Although fewer than 10 nautical miles separate Lesbos from Turkey, hundreds have perished trying to make it across on overcrowded boats.

In 2015, the deadliest year for migrants and refugees crossing the Mediterranean, more than 3,700 people are known to have drowned or gone missing, the International Organization for Migration says. The actual number is believed to be higher.

Ai Weiwei made headlines recently by recreating the image of drowned Syrian toddler Aylan Kurdi, in a move which divided opinion, provoking praise but also condemnation from critics.

His pose recalled the tragic photograph of the tiny child’s body in the surf off a popular Turkish holiday resort which prompted sympathy and outrage at the perceived inaction of developed nations in helping thousands of refugees using dangerous sea-routes to reach Europe, many of them fleeing Syria’s civil war.

Ai Weiwei posed for the photograph on Lesbos, which he has regularly visited since the start of the migration crisis and where he has set up his own studio.

The artist, who divides his time between Berlin and Beijing, has been a vocal critic of Europe’s response to the
migration crisis, using his art to comment on the human tragedy and how it is or is not being addressed.

He has called on Britain’s government to do more to help refugees streaming across European borders and last September Ai Weiwei and British-Indian sculptor Anish Kapoor led a protest march through central London to press for “human rather than political” responses to the plight of refugees.

But Ai Weiwei has said: “I really feel very proud that Germany has acted very civilized.. .to receive those much less fortunate and desperate people.”