With the news of late being dominated by a narrow range of security-related issues what is being called the worst environmental disaster in Brazil’s history has not been getting the attention it deserved.

We are now more than two weeks into the disaster and the scale of damage is only now becoming visible.

On November 5 a mining dam in the mineral-rich province of Minas Gerais failed, releasing 50 million cubic metres of toxic mud into the River Doce basin. The mudslide’s immediate effects were deadly. It washed away the historic town of Bento Rodrigues, killing 11 people. Another 12 are still missing. But the long-term effects could be deadlier still.

The mud is spoil from mines owned by the world’s number one miner, Anglo-Australian BHP Billeton, in partnership with Brazil’s Vale. Another Brazilian company,
Samarco, manages the mine’s dams in a joint venture. Another two dams servicing the mines have been weakened and could collapse, and emergency work is underway on one to try and prevent that happening.

The mud is rich in iron ore and silica, and contains deadly heavy metals such as mercury, arsenic, chromium, zinc, copper and manganese, all at concentrations that are dangerous for organisms. The Rio Doce is one of Brazil’s most important rivers, and hundreds of thousands of people depend on it for drinking and irrigation water.

It joins the Atlantic east of Linhares at Regência, whose beaches are prized by tourists and locals alike. A village of some 2000 people, it is dependent on tourism, fishing, and marine conservation. This disaster could wipe it and many others like it out. 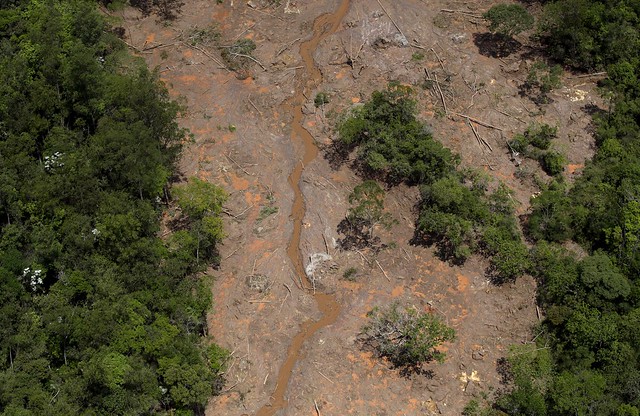 Oxygen levels in the Doce have collapsed, and locals stare in dismay as the once-clear waters turn brown. The surface is choked with debris in many places, and there are fears some species may be wiped out, never to return. Already the river is all but lifeless along more than 500 kms.

The sheer volume of waste also means water courses and currents may be altered, profoundly changing the river ecosystem, and the mud, because it is so iron-rich, will eventually harden to a concrete-like consistency, burying plant life. The decomposition processes of the waste begun in the dam will now trigger chemical and bacteriological contaminations.

Once the mud enters the sea it could trigger marine pollution and possibly even damage the Abrolhos coral reefs, which are sensitive to deposits of inorganic material. Fishing communities along the coast of Espírito Santo state could see their livelihoods wrecked. The mouth of the Doce estuary is a nesting area for endangered sea turtles, an animal sensitive to chemical changes in the water.

A 2013 report criticised the dams for structural flaws and there are accusations of poor maintenance and weak regulation. For the state’s estimated 700 mining dams, there are four inspectors. Fines have already been imposed on the companies, but critics say they are derisory, will not pay for the clean-up let alone pay for compensation, and are so low they will not encourage mining companies to be more careful. In essence, they will conclude it pays to pollute if more fines are not imposed.