The haze particles themselves are likely gray or red, but the way they scatter blue light has gotten the attention of the New Horizons science team. “That striking blue tint tells us about the size and composition of the haze particles,” said science team researcher Carly Howett, also of SwRI. “A blue sky often results from scattering of sunlight by very small particles. On Earth, those particles are very tiny nitrogen molecules. On Pluto they appear to be larger — but still relatively small — soot-like particles we call tholins.” 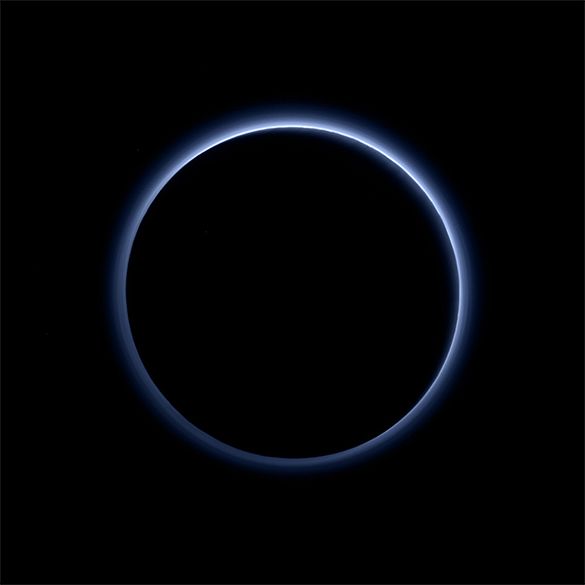 Scientists believe the tholin particles form high in the atmosphere, where ultraviolet sunlight breaks apart and ionizes nitrogen and methane molecules and allows them to react with one another to form more and more complex negatively and positively charged ions. When they recombine, they form very complex macromolecules, a process first found to occur in the upper atmosphere of Saturn’s moon Titan. The more complex molecules continue to combine and grow until they become small particles; volatile gases condense and coat their surfaces with ice frost before they have time to fall through the atmosphere to the surface, where they add to Pluto’s red coloring.

In a second significant finding, New Horizons has detected numerous small, exposed regions of water ice on Pluto. The discovery was made from data collected by the Ralph spectral composition mapper on New Horizons.

Large expanses of Pluto don’t show exposed water ice,” said science team member Jason Cook, of SwRI, “because it’s apparently masked by other, more volatile ices across most of the planet. Understanding why water appears exactly where it does, and not in other places, is a challenge that we are digging into.”

A curious aspect of the detection is that the areas showing the most obvious water ice spectral signatures correspond to areas that are bright red in recently released color images. “I’m surprised that this water ice is so red,” says Silvia Protopapa, a science team member from the University of Maryland, College Park. “We don’t yet understand the relationship between water ice and the reddish tholin colorants on Pluto’s surface.”

The New Horizons spacecraft is currently 3.1 billion miles (5 billion kilometers) from Earth, with all systems healthy and operating normally.