In the latest in a series of articles on how World War II changed the countries that fought it, Mark Davis looks at the United States, which entered the war as a growing presence on the world stage and emerged from it a global superpower.

December 7, 1941 is, said US president Franklin D. Roosevelt, “a date which will live in infamy”. It was the date on which Japan launched a surprise attack on Pearl Harbour, the US naval base on Hawaii. The attack claimed more than 2,400 American lives and was intended to deal a killer blow to US naval capabilities to allow the Japanese fleet to dominate the Pacific.

While the damage was heavy, it failed to destroy US Pacific naval capabilities for good. What it did succeed in was silencing the remaining isolationist voices in Congress and bringing the US into the war. It was the start of US interventionist policy, which has shaped world politics ever since.

Photos: Pearl Harbour seen from a Japanese plane; USS Arizona during the attack 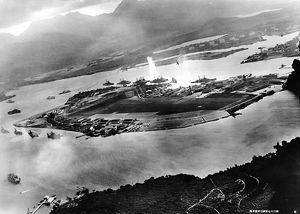 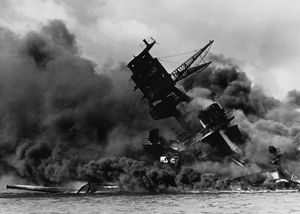 On August 2, 1939 Hungarian physicist Léo Szilard sent a letter signed by Albert Einstein to US president Roosevelt, warning him that Germany could be developing an atomic bomb and advising him to start a US nuclear programme. Roosevelt did just that and the programme came to be known as the Manhattan Project. More than 100,000 people – among them a few Soviet spies – worked on the project, unaware (in the non-spies’ case at least) of the full purpose of their work.

Less than a month after the first successful A-bomb test, and faced with suicidally stubborn Japan resistance, President Truman gave the order to use the new superweapon. On August 6, Hiroshima. Three days later, Nagasaki. Japan surrendered. World War II had ended yet a new, potentially apocalyptic nuclear age was beginning. 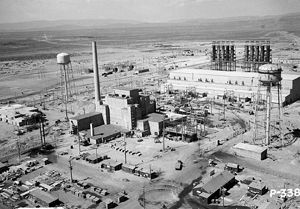 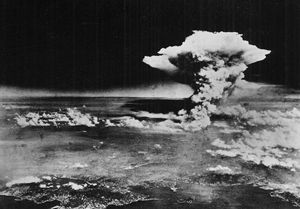 The “Arsenal of Democracy” and lender to the world

The notion of American neutrality in the war was losing credibility even before the attack on Pearl Harbour, thanks in part to the signing of the Lend-Lease bill. Under Lend-Lease, the United States would provide material aid to Hitler’s enemies. With Roosevelt declaring that America should be the “Arsenal of Democracy”, dozens of billions of dollars-worth of defence equipment was shipped to the Allies, without which (as Stalin conceded) they would never have won the war.

Nobody expected all the material to be returned to the lender but in return for its supplies America secured a military presence in Allied bases across the globe. After the war, American support continued with the Marshall Plan; fearful that Europe, broke and in ruins, would succumb (as the Americans saw it) to communism, the US bankrolled Europe’s reconstruction, ensuring that European consumers would be able to afford the new consumer goods that America’s workforce was producing in vast quantities.

Photos: US-built military equipment like these B-24 bombers (pic. left) would arm the Allies while the Marshall Plan financed the rebuilding of Europe, including West Germany, after the war 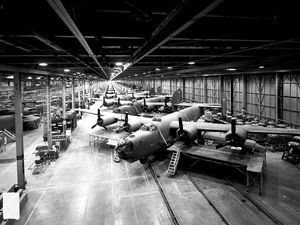 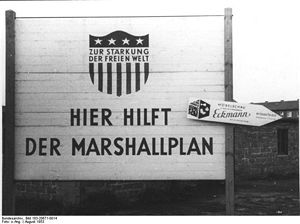 The relationship between the US and the Soviet Union seemed healthy at the Yalta conference in February, 1945; with Germany yet to surrender, Roosevelt, Churchill and Stalin displayed a united front as they established the borders of a post-war Europe. By July at the Potsdam conference much had changed. Germany had surrendered, the USSR had occupied eastern Europe and Roosevelt had died.

During the Potsdam conference, Churchill lost the UK election and was replaced by Clement Attlee. Roosevelt’s successor Harry Truman dropped hints in Stalin’s direction about America’s “new and powerful weapon”, not knowing that Stalin’s spies had already briefed him about the Atom bomb in store for Japan. Any trust that might have existed between Roosevelt, Stalin and Churchill crumbled among the new cast and as the World War was ending the stage was already being set for the next war, between two ideologies and two superpowers, a Cold War that some believe has not yet ended.

Photos: Between Yalta in February and Potsdam in July the “big three” had changed from Churchill-Roosevelt-Stalin to Attlee-Truman-Stalin 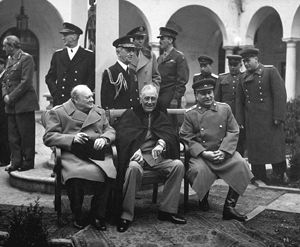 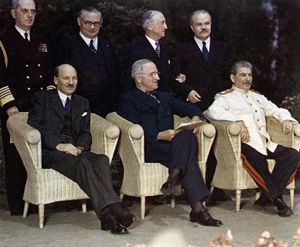 As factories in Europe were being demolished by bombs, those in America were busy satisfying Roosevelt’s request for the “uninterrupted production” of military material. Citizens were urged to donate all the rubber, copper, aluminium and other primary sources they could spare to the war effort. Rationing meant that anything more than basic goods was scarce. When the war ended, the activity in these factories continued but rather than tanks, ships and warplanes, now the end products were consumer goods like cars, televisions and refrigerators.

Guaranteed low interest loans and paid training opportunities for returning war veterans along with maturing government war bonds and savings built during war-time rationing meant the fast-growing (white) middle classes in America had plenty of disposable income with which to enjoy their post-war optimism. Fertile ground for a baby boom and a leap in demand for new American consumer products. And, thanks to the Marshall Plan, consumers in Europe were also starting to purchase new American products. Before the war Americans had been struggling with The Depression. Retail therapy on a global scale after the war helped turn the USA into the world’s economic superpower in what is known as The Golden Age of Capitalism. 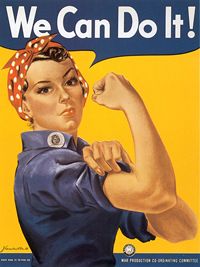 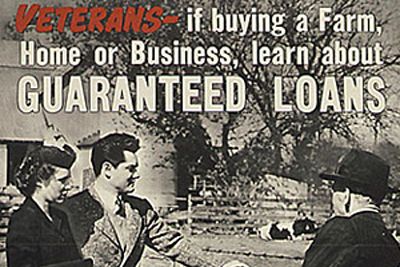 Five issues that feed the WWII debate in Japan