Astronomers have discovered a new type of rocky planet beyond the solar system that weighs more than 17 times as much as Earth while being just over twice the size, scientists said on Monday.

The so-called “mega-Earth” circles a very old star called Kepler-10, which is located about 560 light-years away from Earth in the constellation Draco.

The discovery, announced at the American Astronomical Society meeting in Boston, was a surprise since planets that big were believed to be mostly gas, not solid rocky bodies like Earth or Mars, said physicist Dimitar Sasselov, director of the Harvard Origins of Life Initiative.

“A mega-Earth is a lot of solids concentrated in the same place without any gas. That is a problem because our understanding for how planets form requires the solids to get together in an environment where almost 99 percent of the mass … is hydrogen and helium,” Sasselov told reporters at a press conference.

Smaller solid bodies, like Earth or Mars, which are believed to form from leftover materials, take less time to pull themselves together. With a longer incubation time, large planets should gather up massive amounts of gas in the process – or so scientists thought. 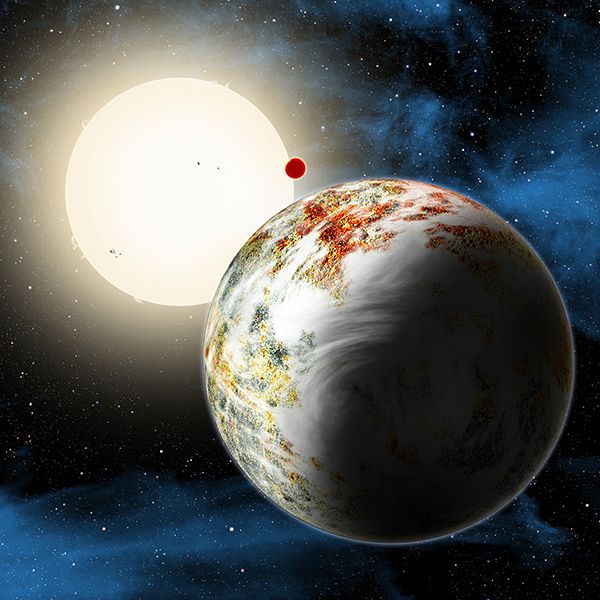 However, mega-Earths formed, the discovery of another type of rocky world bodes well in the search for life beyond Earth, Sasselov added.

“As far as we know – and we know very little about origins of life – we think the emergence of life from geochemistry,” occurs on solid planets, Sasselov said.

Related research shows that about 75 percent of the planets found with NASA’s Kepler space telescope are less than four times Earth’s diameter.

In the solar system, there is nothing between the size of Earth, the largest rocky planet, and Neptune, the smallest gas giant with a diameter nearly four times Earth’s.

“We really want to know about these planets,” astronomer Lars Buchhave, with the Harvard-Smithsonian Center for Astrophysics, told reporters.

“Are they rocky planets with a thin, compact atmosphere like the Earth, or are they rocky cores with some sort of extended hydrogen-helium envelope and where there is really no surface?” he said.