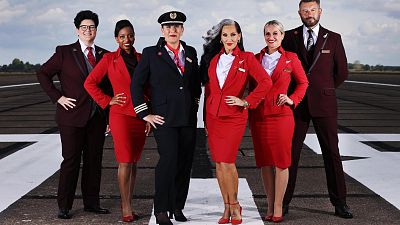 British airline Virgin Atlantic has changed its uniform policy to be more inclusive.

Crew, pilots and ground teams are no longer required to wear gendered uniform and may instead choose which outfit best represents them.

The policy change is part of a wider relaxing of the airline's uniform rules.

Optional pronoun badges have also been introduced for staff along with mandatory inclusivity training.

Passengers, too, can opt to wear pronoun badges. Gender neutral 'U' or 'X' codes are now available on the airline's booking system along with the title 'Mx.' for people holding gender neutral passports, which are available in a handful of countries including Argentina, Austria, Australia, Canada, Colombia, Denmark, Germany, Iceland, India, Ireland, Malta, Nepal, the Netherlands, New Zealand and Pakistan.

Why has Virgin Atlantic changed its uniform rules?

In an announcement of the new rules, Virgin Atlantic states, "The policy champions the individuality of Virgin Atlantic’s people by enabling them to wear the clothing that expresses how they identify or present themselves."

The move is backed by research showing that allowing staff to embrace their individuality at work creates a better experience for both employees and customers.

Data - collected by 3Gem in 2022 on behalf of Virgin - found that it increases mental wellbeing by 49 per cent and feelings of happiness by 65 per cent. The market researcher polled 2,000 adults across the UK.

The uniforms, designed by Vivienne Westwood, consist of a red jacket and pencil skirt or a burgundysuit. LGBTQ+ staff members can now choose whichever option best reflects their gender identity.

Virgin Atlantic hopes the move will cement it as "the most inclusive airline in the skies".

The campaign was announced on Wednesday, with a social media campaign rolled out by 'RuPaul's Drag Race' judge Michelle Visage.

In a video posted on Instagram, she expresses her personal commitment to inclusivity: “As the mother of a non-binary child, and as an ally to the LGBTQ+ community, these efforts by Virgin Atlantic to further inclusivity for its people are extremely important and personal to me.

People feel empowered when they are wearing what best represents them, and this gender identity policy allows people to embrace who they are and bring their full selves to work.”

The video also spotlights staff members embracing the new policy. "It's not about cancelling people. It's not about removing women or removing men. It's just about more inclusive language," says Virgin Atlantic first officer Alison Porte.

"This policy allows everyone to have a seat at the table. It's not about taking away from anyone. It's just allowing everyone from the community to have a voice," adds non-binary performer and activist Tyreece Nye - another celebrity champion of the policy change.