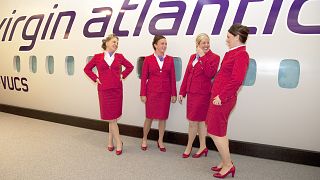 Virgin Atlantic has announced an update to its dress code for female flight attendants.

They will no longer be mandated to wear makeup to work, and pants will become an automatic uniform option.

The change was announced on March 4. Previously, female flight attendants were required to wear makeup and had to request pants in advance if they wanted an alternative to the standard red skirt.

A spokesperson for the airline told CNBC in a statement that the new policies were "a "significant change for the aviation industry," made after "listening to the views of our people."

Virgin Atlantic's uniform has been worked on by various designers since the initial version by Arabella Pollen was introduced in 1984.

"Not only do the new guidelines offer an increased level of comfort, they also provide our team with more choice on how they want to express themselves at work," the spokesperson said.

The airline does not list requirements for appearance on its career website. Candidates for cabin crew roles must be age 18 or older, be fluent in English, and hold a valid passport.

Guidelines can vary depending on the airline. The career website for American Airlines states flight attendant trainees "must present a professional image" and may not have visible tattoos, extreme hair colors or styles, or facial piercings.