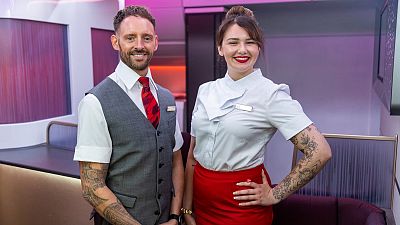 Should cabin crew be allowed to have visible tattoos? Virgin Atlantic says it’s the first UK airline to allow this.   -   Copyright  Courtesy Virgin Atlantic
By Euronews  with Reuters  •  Updated: 31/05/2022

Cabin crew for Virgin Atlantic will now be allowed to display tattoos, after the UK airline announced a relaxation of its policy ahead of a fresh recruitment drive.

“But now, employees can show off their ink to the world, while still representing Virgin Atlantic in their uniform,” the airline said on Tuesday, claiming to be the first UK carrier to allow visible tattoos.

Virgin Atlantic told Euronews Next that until today, uniformed employees had to either cover up visible tattoos with plasters or makeup, or request a special long-sleeved shirt instead of the standard short-sleeved version while on duty.

“Many people use tattoos to express their unique identities and our customer-facing and uniformed colleagues should not be excluded from doing so if they choose,” Virgin Atlantic’s Chief People Officer Estelle Hollingsworth said in a statement.

“That's why, in line with our focus on inclusion and championing individuality, we're relaxing our tattoo restrictions for all our people”.

Neck and face tattoos not allowed

However, the easing of the ban does not extend to all types of tattoos.

The airline said neck, face and head tattoos must still be covered, although it was currently reviewing that policy. Offensive tattoos are also required to be covered up.

The news comes as Virgin Atlantic plans to hire 300 more flight attendants, at a time when airlines and airports are struggling to keep up with a surge in travel after months of COVID-19 restrictions.

In conjunction with the announcement, Virgin Atlantic posted messages of support for its employees on social media as part of International Flight Attendant Day.

“We’ve always encouraged our people to be themselves, so from today, they can now show their tattoos with pride,” the airline said in a tweet, posting pictures of uniformed cabin crew sporting arm tattoos.

A traditionally glamorous role, flight attendants have always been expected to look well groomed, with most airlines setting strict dress requirements for staff.

In 2019, Virgin dropped a requirement for female cabin crew to wear makeup.