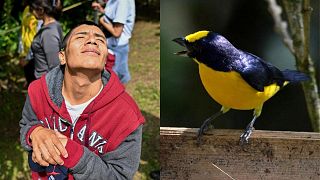 Colombia is making wildlife accessible to all through inclusive birding tours aimed at the visually impaired   -   Copyright  AFP
By Ben Anthony Horton  with AFP  •  Updated: 18/02/2022

Blind from a very young age, Juan Gabriel Soto is developing an exceptional ability: to identify birds by their songs in the Colombian rainforest.

Together with six visually-impaired companions, Soto uses a rope to guide him along a 400-metre ‘sighting path’ in a rural area of ​​Cali, Colombia's third largest city.

A custom-made audio guide helps him recognise the sounds of the birds that cross his path.

"It's a way of spotting birds with our ears," says Soto, who lost his sight in an accident when he was three.

"Little by little you learn, because there are so many species and so many sounds.”

Soto has completed the tour three times now. The first time, he did not identify any birds, but over time he has been sharpening his ears and learning to distinguish between the songs of the hummingbird, the cock-of-the-rock and the sparrowhawk.

"There are birds that have more than five or eight sounds,” says Stiven Santander, a 29-year-old tourist who is also visiting the sensory bird experience.

“Learning to identify them, to develop that sense is not easy but it becomes very interesting the longer you work at it.”

These ‘sound routes’ are a pioneering initiative in Colombia and are inspired by Juan Pablo Culasso, a blind Uruguayan famous for his ability to distinguish the trills of more than 3,000 birds.

We all have the right to enjoy nature

With over 1,900 registered species, Colombia is the country with the greatest diversity of birds in the world.

Before entering the rainforest, visitors touch plastic replicas of some species to get an idea of ​​what they are going to hear.

"It's a sensational thing because when you can’t see, you use your touch to imagine,” says Stiven.

On the path, visitors advance with walking sticks as exotic birds are attracted by small plates of food.

"The entire population with visual disabilities has the right to enjoy nature," says Juan Gabriel Soto.

According to Asociación Rio Cali - the NGO behind the project - there are more than ten paths like this in the outskirts of Cali.

"We are trying to help the 7.1 per cent of Colombians who live with visual disabilities," says Herman Bolaños from the Regional Autonomous Corporation of Valle del Cauca.

Watch the video above to see the sensory birding experience for yourself.