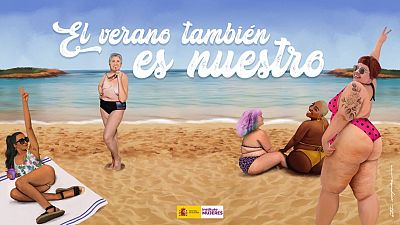 Spain’s government has a message for women who are uncomfortable about their bodies when they wear bathing costumes: Don’t be.

The government’s Equality Ministry launched a summer campaign on Thursday encouraging women to reject “stereotypes” and “aesthetical violence” - a reference to social pressure some women feel to conform to beauty ideals.

A poster advertising the campaign features women of different ages, sizes and skin colours in bathing costumes on a beach.

The slogan for the campaign is, “Summer belongs to us, too.”

In a tweet, Equality Minister Irene Montero said, “All bodies are valid and we have the right to enjoy life as we are, without guilt or shame.”

The head of the Women’s Institute, a government body, said gender stereotypes are at the root of discrimination based on physical appearance.

“Expectations are projected onto women about how they should look,” Antonia Morillas told state news agency Efe. “That doesn’t only affect our self-esteem, it also takes away our rights and limits how we behave in and whether we enjoy public spaces.”

Spain's Socialist-led coalition government, which came to power four years ago, has made women’s rights one of its political banners. The cabinet has 14 women and eight men in ministerial positions.