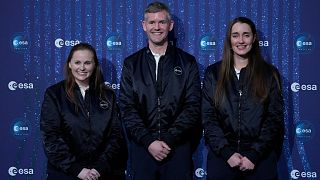 The European Space Agency (ESA) has made history by selecting an amputee who lost his leg in a motorcycle accident to be among its newest batch of astronauts - a leap toward its pioneering ambition to send someone with a physical disability into space.

John McFall, a 41-year-old from the UK who lost his right leg when he was 19 and went on to compete in the Paralympics, called his selection at Europe's answer to NASA "a real turning point and mark in history".

"ESA has a commitment to send an astronaut with a physical disability into space... This is the first time a space agency has endeavoured to embark on a project like this. And it sends a really, really strong message to humanity," he said.

The newly-minted parastronaut joins five career astronauts in the final selection unveiled during a Paris news conference on Wednesday - the conclusion of the agency's first recruitment drive in over a decade aimed at bringing diversity to space travel.

Globally, 65 of the more than 560 people who have explored space have been women, most of them Americans.

But Wednesday's list did not include any persons of colour. The hiring campaign didn’t specifically address ethnic diversity but, at the time, stressed the importance of "representing all parts of our society".

McFall will follow a different path than his fellow astronauts because he will participate in a ground-breaking feasibility study exploring whether physical disability will impair space travel. It's unchartered land since no major Western space agency has ever put a parastronaut into space, according to ESA.

The feasibility study, which will last two to three years, will examine the basic hurdles for a parastronaut, including how a physical disability might impact mission training and if modifications to spacesuits and aircraft are required, for example.

The ESA’s 22 European members also announced their commitment to "space ambitions" with a budget rise of 17 per cent - representing just under €17 billion over the next three years. It will fund projects as diverse as tackling climate change to exploring Mars.

For more on this story, watch the report in the media player above.