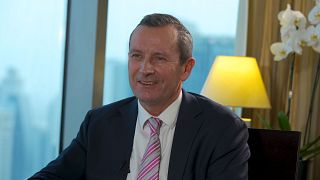 Mark McGowan tells The Dialogue that building a team and taking tough decisions are essential in order to be a good leader   -   Copyright  Euronews
By Didier Burnod  & Guy Shone, Mohamed Elashi  •  Updated: 09/11/2022

The Premier of Australia's largest state doesn't mince his words, and he's clear that leadership doesn't work in isolation. "If you want to get to a leadership position, you have got to be prepared to do things that are tough and difficult and that you don't want to do," Mark McGowan told The Dialogue. "You've also got to be prepared to build a team and take people with you."

Being a State Governor is no easy task, but Mark was born to do it. He grew up far away from his current life in Rockingham, Western Australia (WA), over in the Eastern Australian State of New South Wales. He credits his father, a wool classer, with having a big influence on him, shaping him into the man he is now.

"It's about taking responsibility, having a strong work ethic, always doing your best no matter what the circumstances you face are."

He explains his father instilled in him the idea that it's about "taking responsibility, having a strong work ethic, always doing your best no matter what the circumstances you face are." It's an attitude he believes is vital for his job, "Otherwise, you probably shouldn't be in political life."

That idea stayed with him and was forged deeper during a naval career which saw him posted to WA. Mark describes how he watched the senior officers, "How they acted and how they operated and worked," giving him a basis of "someone to follow" regarding discipline.

Despite the move into politics, Mark still is a member of Australia's naval reserves. His focus now, though, is on steering his state to success.

It's been a difficult few years at the top, with the global Covid-19 pandemic impacting every decision. While Australia closed its international borders, Western Australia went further, largely shutting itself off from the rest of the nation as outbreaks elsewhere continued.

"We were isolated basically for two years," he explains. It's a decision Mark stands by. "We had very few cases, we had very little lockdown and virtually no one pass away."

"At the end of the day, your decision might be right or wrong, but unless you are prepared to make one, you're really not cut out to be a leader."

Not everyone was happy with the way the Premier took control, but again he defends his choices. "At the end of the day, your decision might be right or wrong, but unless you are prepared to make one, you're really not cut out to be a leader," he says.

Mark is a man with clear political convictions. "You've got to actually have a belief system…to actually believe in things. You've got to be prepared to do them if you get the capacity or the opportunity," he says.

However, part of being the State's Premier means he's also aware that his ideals don't always win out. "You've always got to take account of all the other factors, the public sentiment, what's practical, what's achievable, affordable. With everything, there is balance," he adds.

Although the pandemic is still lingering, Mark is gearing up for the future. On his first overseas visit in two years, he is keen to make deals that will benefit WA.

"What we are doing now is reconnecting with the world," he says. "I am promoting tourism, international students, investment and opportunities for trade."

Qatar is a key stop on his tour. During a speech at the Australian Embassy in Doha, Mark outlined his gratitude to Qatar Airways, which continued to fly to Western Australia throughout Covid-19, keeping trade links open.

"We want to continue that engagement with Qatar," he states. His first real visit to the country, "unless you count a layover at the airport," he quips, has left a lasting impression.

A tour of one of the new stadiums built for the FIFA World Cup 2022 was a particular highlight. "The World Cup will be the biggest sporting event this year. Looking at this stadium and how it will operate is incredible," he says. "I suspect this will be a remarkable sporting event that will be talked about forever," he adds.

That's an outcome Mark desires for his adopted state too. With every sentence, he is keen to promote the part of the world he represents. "My state is the most outward-looking state in Australia," he gushes as he outlines his goal. "My role as the Premier of the State is to promote the state, to make sure I leave it in a stronger, better place than where I found it."

The cowboys roaming the deserts of Bahrain