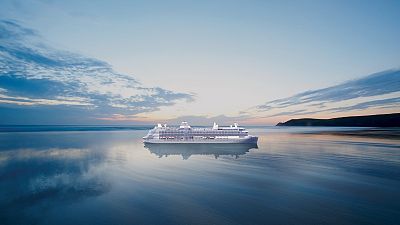 Silversea Cruises is developing the Silver Nova, a hybrid luxury cruise ship that will use fuel cells to stop emissions when docked.   -   Copyright  Courtesy of Silversea Cruises
By Damon Embling  •  Updated: 21/06/2022

Under scrutiny for its environmental footprint, Europe’s cruise industry is blasting the horn that it’s investing heavily in new tech and innovation to sail into a greener future.

With annual global passenger numbers hitting 30 million before the COVID-19 pandemic, it’s making a comeback with a new global goal of net-zero carbon cruising by 2050.

Amid increasing pressure for more sustainable and responsible travel, the industry has already been re-thinking ship design and operation, including the pursuit of alternative fuel and power technologies and stepped-up recycling and sustainability in supply chains.

But for environmental campaigners, the 2050 target for carbon neutrality may well be seen as too little, too late.

"We should do everything we can to bring that timeline forward," Marie-Caroline Laurent, Europe Director-General of the Cruise Lines International Association (CLIA), told Euronews Next at the trade body’s inaugural European summit in Genoa, where sustainability dominated.

"We are obviously dependent on the technology readiness and availability. There is a lot of discussion about creating the first zero-emissions ship. Based on technology, this ship can only be available around 2030, 2035. We are also reliant on the replacement of older ships," she said.

While cruising is recognised as an important part of Europe’s travel and tourism economy, a university study out last year found that a large ship can notch up a bigger carbon footprint than 12,000 cars. It also highlighted that an overnight stay onboard consumes 12 times more energy than a night in a hotel.

More than €20 billion has already been invested globally in ships with new technologies and cleaner fuels, to reduce air emissions and achieve greater efficiency, according to CLIA.

Exhaust Gas Cleaning Systems (EGCS), for example, have been fitted to strip sulphur content out of exhaust fumes and to reduce particulate matter (the solid particles generated by burning).

Next year, Monaco-headquartered Silversea Cruises will debut what it bills as a "game-changing" cruise liner.

LNG emits around 25 per cent less carbon dioxide (CO2) than conventional marine fuels, but its emissions of methane – a potent greenhouse gas – remain particularly problematic to campaign groups like the International Council on Clean Transportation.

The Silver Nova ship, accommodating over 700 passengers, will use fuel cells to provide 100 per cent of power while in port, meaning engines can be cut. It will be the first hybrid luxury cruise ship of its kind to be free of emissions when docked, according to Silversea Cruises.

This comes alongside an industry commitment that, by 2035, all ships calling at ports where shoreside electricity is available will be equipped to use it. But cruise companies say large-scale use of this is being held up by lagging port infrastructure.

"Shoreside electricity is a great thing, but there are only a few ports around the world where you can go and hook up," Roberto Martinoli, CEO of Silversea Cruises, told Euronews Next.

"Most of the ships, especially the big ones, are already equipped with that. And some of the smaller ones, like ours, are in the same situation. We need the infrastructure to supply the power and it must be clean power because otherwise you’re not resolving any problems".

Like Silversea, the Costa Group, an Italian-based subsidiary of Carnival Corporation, is investing heavily in LNG. Costa currently has four LNG-powered vessels, the first two having joined its fleet in 2019, followed by another two last year.

It’s also preparing to test out rechargeable batteries and is turning onboard food waste into fertiliser.

The company says a driving force behind its green transformation is coming from cruise workers themselves.

"I’m following a lot of interviews when we hire people and in virtually every interview, the applicant asks questions about sustainability, what our approach is. I believe this is a main trigger," said Michael Thamm, Group CEO of Costa Cruises and Carnival Asia.

Other alternative sources to heavy fuel oils being developed include biodiesel, methanol, ammonia and hydrogen. But there are engineering, supply and regulatory hurdles that need to be resolved ahead of large-scale adoption.

Finnish company Wärtsilä, which has a workshop in Genoa, develops and provides marine technology with a key focus on new fuels.

"It’s not just about how you implement one fuel or another into our engines," Giovanni Paladino, who looks after strategic accounts at Wärtsilä, told Euronews Next.

"You need to think, how it can be sustainable in an overall supply chain philosophy. We need to think about the global energy problem for the world".

In this context, Wärtsilä sees methanol as a frontrunner in the green transition, saying it complies with environmental regulations, has established supply and can also be retrofitted relatively easily to existing ships.

"That’s one of the interesting aspects of the decarbonisation path, the transition to the sustainable cruise, because we need to also impact strongly on the existing fleets," Paladino said.

Paladino rules out the idea of having fully battery-operated cruise ships in the future, highlighting that the storage space currently needed for long journeys makes that unrealistic.

Instead, he believes hybrid power will be the way forward to achieving net-zero cruising by 2050.

"A zero-emission ship is not there yet, but we are targeting it," he said.

The pursuit of sustainability also filters down to those building the next generation of cruise liners, who are also under pressure to be as green as possible when it comes to innovating in design.

At Fincantieri’s shipyard in Genoa, which employs around 5,000 workers, three huge vessels are currently taking shape, with one due off the production line next month.

"The materials that we use in the 30-year life of a ship will be recycled," said Giuseppe Torrente, Senior Vice President at the Fincantieri Sestri Ponente shipyard.

"We don’t use plastics. For all the steel activities, and all the activities we have in the shipyard, we can separate the waste. We recycle everything".

Cruising is a competitive business. Dazzling new looks and unique onboard experiences have long been the battleground. But innovating for a more sustainable future appears to now get equal billing.