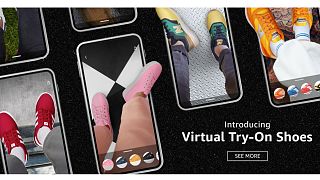 The feature is currently only available for iOS users in the United States and Canada on the Amazon shopping app.   -   Copyright  Amazon. Euronews
By Euronews  •  Updated: 10/06/2022

Usually “try before you buy” has only really applied to shopping in physical shops, but you can now virtually try on digital versions of shoes before you buy them on Amazon.

The online retailer has announced the launch of its “Virtual Try-On for Shoes” feature, an augmented reality shopping tool.

As the name suggests, shoppers can tap the “virtual try-on” button on a footwear product and then aim their smartphone camera at their feet. A pair of virtual shoes then appears on their screen.

While you cannot see or feel how the shoe fits, customers can change the shoes’ colour options to see what it would look like.

Amazon said “thousands of styles” have been added to the feature including New Balance, Adidas, Reebok, Puma, Superga, Lacoste, Asics, and Saucony.

For the moment, the feature is currently only available for iOS users in the United States and Canada on the Amazon shopping app.

The company has been building its virtual shopping experiences since 2017 after it launched Amazon “AR View,” and “Room Decorator” which lets customers see what a product would look like in their home.