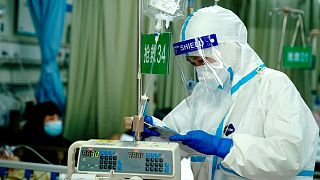 A medical worker checks records in the emergency room at the Minhang Hospital affiliated to Fudan University in Shanghai, Wednesday, April 20, 2022.   -   Copyright  Zhang Jiansong/Xinhua via AP
By Euronews  with AP  •  Updated: 10/05/2022

The World Health Organization estimates that nearly 15 million people were killed either by COVID-19 or by its impact on overwhelmed health systems in the past two years, more than double the official death toll of 6 million.

Its calculations show the death toll associated directly or indirectly with the COVID-19 pandemic - described as “excess mortality” - between 1 January 2020 and 31 December 2021 was approximately 14.9 million, and potentially as much as 16.6 million.

WHO calculated excess mortality as the difference between the number of deaths that have occurred and the number that would be expected in the absence of the pandemic based on data from earlier years.

Excess mortality includes deaths associated with COVID-19 directly, due to the disease, or indirectly - when people suffering from other conditions were unable to access prevention and treatment because health systems were overwhelmed by the pandemic.

WHO noted that excess mortality may have been limited by deaths averted during pandemic lockdowns due to lower risks of events, such as road accidents or occupational injuries.

The health body also said that most of the excess deaths - 84 per cent - were concentrated in South-East Asia, Europe, and the Americas.

“These sobering data not only point to the impact of the pandemic but also to the need for all countries to invest in more resilient health systems that can sustain essential health services during crises, including stronger health information systems,” Dr Tedros Adhanom Ghebreyesus, the WHO’s director-general, said in a statement.

“WHO is committed to working with all countries to strengthen their health information systems to generate better data for better decisions and better outcomes”.

The figures are based on country-reported data and statistical modelling. WHO did not immediately break down the figures to distinguish between direct deaths from COVID-19 and others caused by the pandemic.

Accurate numbers on COVID-19 deaths have been problematic throughout the pandemic, as the figures are only a fraction of the devastation wrought by the virus, largely because of limited testing and differences in how countries count COVID-19 deaths.

Scientists at the Institute of Health Metrics and Evaluation at the University of Washington guessed there were more than 18 million COVID deaths from January 2020 to December 2021 in a recent study published in the journal Lancet, and a team led by Canadian researchers estimated there were more than 3 million uncounted coronavirus deaths in India alone.

Some countries, including India, have disputed WHO's methodology for calculating COVID deaths, resisting the idea that there were many more deaths than officially counted.

Earlier this week, the Indian government released new figures showing there were 474,806 more deaths in 2020 compared to the previous year, but did not say how many were tied to the pandemic.

How much can COVID alter our brains? A lot, brain scan study reveals