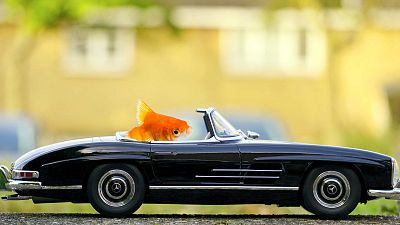 It's not the typical way a goldfish travels - but this is no ordinary goldfish.

It's been trained by researchers at Israel's Ben Gurion University (BGU) to "drive" a tank on a robotic platform. The scientists say this mimics navigational skills more commonly associated with humans driving a car.

The team behind the experiment wanted to explore whether there is something universal about navigation and space representation in the brains of animals.

The findings have been published in a peer-reviewed journal, Behavioural Brain Research.

In the experiment, the researchers placed a fish tank on top of a mobile platform, equipped with sensors and cameras to track the goldfish.

"We equipped the water tank with sensors, so it doesn't collide with obstacles in the environment, in case the fish decides to get too close to a wall," explained Professor Ohad Ben-Shahar from the university's Department of Computer Science.

"But also with the camera that can sense where the fish is in the water tank and guides the vehicle according to that pause of the fish in the tank".

The fish's movements triggers the platform to move. A successful navigation brings a modest reward of a food pellet, an incentive reminiscent of Russian scientist Ivan Pavlov who conditioned his dogs to salivate for food each time they heard the sound of a bell.

"Fish don't drive cars. So we had to train them to understand what we wanted them to do. So eventually they need to make navigational decisions," said Ben-Shahar.

The conclusion was that this space representation that the fish constructed, even for the terrestrial environment, was very similar to what it was accustomed to in its native environment. And because of that, its navigational decisions could be quite similar to what we observe in water.

"In our experiment, the fish had to get accustomed to a visual target that is placed in their arena and which it sees through the walls of the water tank. So we trained such a fish to understand that it needs to get to a particular visual target".

“In our case, it was a pink board that we mounted on one of the walls. The fish had to understand that this is the target it needs to navigate to, and this is done by typical conditioning procedures where in the beginning the fish just wanders around, both in the tank and in the room. But every time it gets to the target, we award it with a food pellet".

Ben-Shahar says that it takes a little time for the goldfish to pick up the process.

"After a few days, 10 days maximum, the fish understands that it needs to find the target and drive that vehicle towards that target," he said.

Is navigation a universal ability in animal brains?

Fish driving water tanks may be a strange and even amusing sight. But more importantly, the results have scientific value.

The team believes it suggests that navigation is a universal ability and shows fish are capable of learning complicated tasks.

"The conclusion was that this space representation that the fish constructed, even for the terrestrial environment, was very similar to what it was accustomed to in its native environment. And because of that, its navigational decisions could be quite similar to what we observe in water," said Ben-Shahar.

"And implicitly that means that there is something universal in how space is represented for different environments and possibly in different minds, which makes this navigation something very fundamental that, whatever brain you choose, the brain does".

The research was supported by The Israel Science Foundation, a Human Frontiers Science Foundation grant, The Lynne and William Frankel Center for Computer Science, and the Helmsley Charitable Trust through the Agricultural, Biological and Cognitive Robotics Initiative of Ben-Gurion University of the Negev, the BGU said in a press release.

NASA may send 'Dragonfly' to an alien world